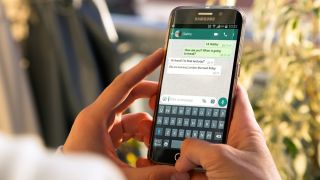 An unreleased version of WhatsApp includes a Disappearing Messages option that will give users the ability to send messages that self-destruct after a set period of time.

WABetaInfo spotted the addition in build 2.19.275 of the Android version of the WhatsApp app. Found within Group chats, the Disappearing Messages option is not actually yet functional, but it will be possible to set messages to delete after a period of between five  seconds and an hour according to screenshot shared by the site.

Although expiring message option have been seen in group messaging, it would be strange if WhatsApp didn't extend the feature to individual chats as well.

WhatsApp wouldn't be the first messaging tool to include such a feature, the likes of Telegram, Facebook Messenger and Signal already enable users to specify when messages should vanish.

It’s the sort of option which can prove useful when you need to send private, time-sensitive, or otherwise delicate information which you'd rather wasn't lying around in someone's chatlog for longer than absolutely necessary.

For fans of privacy who've turned to WhatsApp for the security of its end-to-end encryption, the feature simply cannot be added to the app soon enough. For the privacy and security of messages to be fully maintained, however, it would also have to be possible to block the copy or screenshotting of chats, and it's not clear that this is something that is planned.

It is not known quite when Disappearing Messages will be released to everyone, and WhatsApp is unlikely to pin down any particular date while it is working to perfect the feature. WABetaInfo suggests that the feature is really only in alpha rather than beta stages, so it might be a little while before it is seen in the release version of the app.