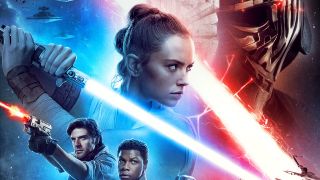 Check out our Star Wars: The Rise of Skywalker review for a more positive take on the movie. Some mild spoilers follow.

The argument over what Star Wars is supposed to be is one of those topics that's been out of control for as long as I can remember. Is it meant to be recycled nostalgia? Or can Star Wars be something more than beholden to classic movies from 40 years ago? It's the original blueprint for fanbase infighting. The only thing fans seem to agree on these days is that Baby Yoda is cute (and he really, really is).

The Rise of Skywalker says Star Wars is ultimately the former: nostalgia, reheated over and over again. It's got no shortage of spectacular-looking battle scenes and moments designed to please long-time viewers, but it's guilty of making its fictional universe feel extremely tiny. This is the opposite of how that first Star Wars movie made you feel about its setting.

From the outside looking in, the perceived backlash towards The Last Jedi appeared to shape a lot of the key decisions behind this movie. If you embraced the subversion of expectations in Rian Johnson's Episode 8 – flawed as some parts of the movie absolutely were – this feels like it's swerved way too far in the other direction to course-correct matters. It's a patchwork of fan service-y moments, and it retcons at least one key element of The Last Jedi while making polite, cursory nods to the movie to make up for it.

Bound to the past

Without getting into major plot details, The Rise of Skywalker largely deals with the next phase of the Resistance and the First Order's ongoing battle for the galaxy (a 'Star War', if you will), with Emperor Palpatine now in play, as revealed by the film's first trailer. If you didn't like the broken up stories in The Last Jedi that gave Poe, Finn and Rey different narrative obstacles to deal with, this mostly unites them for the movie's running time.

The problem is, this film doesn't have any time to remind you of why you might've liked Rey, Poe and Finn in The Force Awakens to begin with. There's simply too much plot to deal with, a rush to the finish that shotguns through locations with nothing to emotionally bring you in sync with the characters' journeys, save for a little more attention paid to Poe Dameron's background.

The movie's other major issue is Palpatine. His presence in the movie steers The Rise of Skywalker into a dead end almost straight away, and if you can't buy into why he's even a part of Episode 9, you won't find much to like about this film. With Supreme Leader Snoke taken off the table in Episode 8, he's a cynical choice for a big bad: an unconvincing representation of a weak effort to link all nine Star Wars episodes like they were planned as one big story.

The Force Awakens managed to capture what people loved about old Star Wars – it was debatably too close in how it structurally mimicked A New Hope. But The Rise of Skywalker is a lot worse because it feels limited by the fact that it's a Star Wars film. Even though as a whole it isn't really a copy of any particular movie in the series, it's overloaded with individual moments of fan service – it's pandering to what it thinks its audience wants to see in a way that mostly falls flat.

Your mileage with The Rise of Skywalker will likely vary depending on how you feel about the direction Star Wars has been going in under Disney. It's possible this is actually the Star Wars movie you've been craving, with deeper links to the past films, and constant reminders of the things you consider quintessentially Star Wars. Indeed, our reviewer found merit in the way that relics of the original trilogy connect to this new movie, and fair enough if that's your experience of the film. Whatever happens, it will be divisive.

You might also come out of The Rise of Skywalker wondering why a universe this big is bound by such a limited set of characters and concepts, though. That's especially disappointing when its last chapter explored the idea that we don't have to be bound by tradition and legacy, and this difference highlights the ways the sequel trilogy has suffered from an obvious lack of a connecting creative vision. This does not feel like a film set up by either The Force Awakens or The Last Jedi. The addition of Palpatine feels like a late gambit. With a very clear story and themes set out from the start, this trilogy surely would've played out more consistently.

More than that, I got to the end of this movie wondering why this trilogy got so close to saying something new about Star Wars before slamming on the brakes. If Star Wars is doomed to repeat its greatest hits forever, it'll be an enormous shame. You surely don't have to look far to find filmmakers who want to do more than that with this amazing universe.