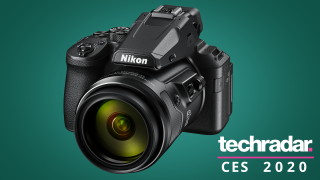 No-one makes eccentric superzoom bridge cameras like Nikon, but rather than try and outdo the Nikon P1000's 125x optical zoom, the company has instead released an upgraded version of its 83x optical zoom model called the Nikon P950 at CES 2020.

The successor to the Nikon P900, the P950 doesn't change a whole lot – in fact, it feels somewhere in between a firmware upgrade and genuine step up from that 2015 model, which was the first bridge camera to have 83x optical zoom when it launched.

The fundamentals remain the same as before – 83x optical zoom with a maximum f/2.8 aperture, backed by a 1/2.3-inch, 16MP sensor – but Nikon has tweaked the design and software to more closely match the P1000, while plugging some feature gaps that P900 fans have been crying out for.

The two main improvements are the ability to shoot 4K/30p video and support for Raw shooting, which was a glaring omission on its predecessor. If you fancy shooting video alongside your travel stills, there’s further good news in the form of a built-in mic jack and accessory shoe, which means you can now attach an external mic to the camera.

More minor tweaks include a new OLED EVF, which is now double the size of its predecessor and has a far better 2.36-million dot resolution, and the same zoom controls as the P1000.

So who is the new Nikon P950 for? Bridge cameras have traditionally been aimed at travelers who want the versatility and handling of a DSLR, but without the hassle of carrying around a bag of lenses. And while smartphones and small, mirrorless cameras have dented their appeal in recent years, the new P950’s equivalent of a 24-2000mm zoom range remains appealing for those who are planning to shoot a range of different subjects, from wide-angle buildings to distant wildlife, but want to retain image quality.