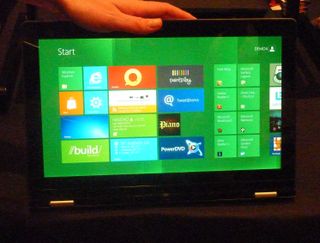 There's a Windows 8 tablet battle on the cards

Lenovo could be the first company to put a Windows 8 tablet on the market, according to a source who predicts an October launch for the device.

A source for The Verge said that Lenovo will be "first to market" with its Windows 8 tablet, beating off competition from the likes of Dell, HP, Nokia and Asus.

The source did not disclose any details on the new slate, apart from confirming Lenovo would be sticking an Intel processor inside.

We may have already seen this fabled tablet, as the 13.1-inch Lenovo IdeaPad Yoga was shown off at CES 2012, running Windows 8 – but also sporting a 360 degree folding keyboard.

It may not be so simple for Lenovo however, as Dell CEO Michael Dell has gone on record to say that his company will launch its own Windows 8 tablet "on the exact day" the new operating system hits the market.

Dell is looking to break out of its PC company roots and a flagship Windows 8 tablet could help, as long as it does a better job than it did with the Dell Streak, which failed to set the market alight.