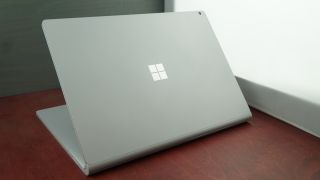 We've all been kept waiting for a Surface Book 3, as Microsoft hasn't updated the product in over two years and neglected it when it launched new Surface Pro and Surface Laptop models.

A new leak seems to suggest that new Surface Book 3 could be in the works, if we are to believe benchmarks posted by leaker @_rogame and shared by Notebookcheck.

The leaked benchmarks show multiple configurations for the Surface Book 3. In one benchmark, it is configured with an Intel Core i7-1065G7 with an Nvidia GeForce GTX 1660 Ti Max-Q, while another benchmark shows it running the same processor with a GeForce GTX 1650 Max-Q.

In those two cases, the processor is an Intel Ice Lake chip. But, @_rogame suggests that Ice Lake may not be the only chip powering the Surface Book 3.  Another benchmark shows an unspecified processor that could be a higher-performance Ice Lake chip or even a Tiger Lake chip.

The Microsoft Surface Book 2 packs 8th-Gen Intel Core processors, so it would be fair to expect an upgrade to the latest, high-end chips from Intel with the next update. Given battery life and heat concerns that would arise from from a high-performance chip in the tablet form factor, that would likely rule out Comet Lake, leaving only Ice Lake or Tiger Lake as options. The inclusion of Nvidia 16-series graphics also seems like a likely upgrade to the current hardware options.

While these leaks provide helpful insights into the potential specs of a Surface Book 3, there are still more questions to answer.

We still have no timeline for a release, though we'd hope sometime this year. There are also few clues about other upgrades beyond a potential redesign for the keyboard to include a writing surface on the bottom.

A pairing between Ryzen 4000 and the Surface Book 3 may not be a stretch, even if these leaked benchmarks don't suggest it. Microsoft showed AMD some love with the recent Surface Laptop 3, and the new Ryzen 4000-series mobile processors are expected to show up this year with desktop-class performance. Given the Surface Laptop 3 launched with both Intel and AMD options, Microsoft could pull a repeat of that maneuver with the Surface Book 3 to give it a big performance boost.