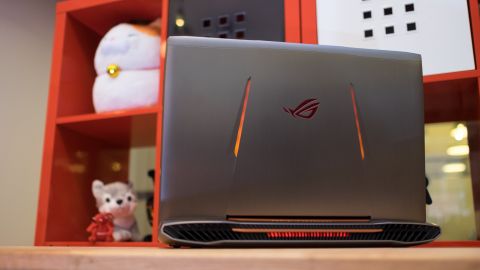 This top-spec portable PC gaming beast offers plenty of power, and its stand-out looks and specialist cooling system make it a machine to be reckoned with – plus it's actually quite a value, too.

Once all but a misnomer, today there are more gaming notebooks to choose from than ever. While the trend lately has favored more more svelte and understated gaming laptops, machines packing a big screen and big performance haven't gone anywhere.

Asus's enthusiast gamer hardware and accessory line, Republic of Gamers (ROG), includes a range of ROG PCs and laptops packing the latest performance hardware into distinct chassis and frames that are aimed to stand out.

Following last year's highly-praised Asus ROG G751, the Asus ROG G752 is another portable PC gaming beast that features a distinctive design and plenty of oomph to run even the most demanding of PC games at the highest settings.

Although this 17.3-inch monster is available in a variety of high-end configurations, the model sent to techradar for review (a G752VT, specifically) features an Intel Skylake, 2.6GHz quad-core i7 processor, 16GB of DDR4 RAM, a 128GB solid-state drive (SSD) alongside 1TB of hard disk storage, and a super-fast GeForce GTX 970M graphics card with 3GB of video memory.

With beefy specifications and Asus's renowned build quality in tow, there's a lot to like about this massive machine, coupled with a few surprises along the way.

While it was an early adopter of matte black plastic, Asus has more recently been swamped by gaming laptops with a very similar aesthetic. With the ROG G752, the company has clearly decided to change tact and head in a direction of its own that is dominated by silver and bronze – a color combination that's rather distinct, and effortlessly alludes to the power concealed within.

Much of the outside is covered in brushed aluminium that makes the G752 feel well-made and a little classier than if it was simply silver-sprayed plastic. Angular lines and masculine glowing red segments on the lid make the G752 stand-out from more sedate gaming notebooks, such as the superb 2015 Razer Blade.

The rear fan grille looks like something you'd be more likely to find on a prototype super car at the Geneva Motor Show than a mass-produced gaming laptop. There are even some cool red LEDs nestled inside the grille that make it look like a red-hot exhaust.

Lift the lid, and you're met with a markedly less impressive interior, which retains portions of the angular design and bronze accents, but mixes them with black matte plastic in a rather jumbled fashion. Personally we would have preferred to see the clean angular lines carried on inside, rather than the assortment of angles that looks a little over-the-top.

Although there is, of course, a large number of components to cram into the G752 notebook, we cannot help but think that the bezels that surround the 17.3-inch screen are a little unforgivable when compared to the smaller Aorus X3 Plus v3 or even last year's Asus ROG G751.

The excellent, chiclet-style keyboard is well-spaced and responsive, and features Asus's anti-ghosting keyboard technology. A dedicated recording key and five programmable macro keys are located above the keyboard, which can be setup to provide speedy access to preset functions in-game – a very handy addition for dedicated gamers.

Red backlighting is no change from last year's model, and so feels a little out of place next to the silver and bronze shell. But – if nothing else – it's less distracting than some of the blinding blue backlights other manufacturers insist upon.

The trackpad is smooth, large and equally responsive, and – while it won't replace a precision mouse for many gamers – it's a good substitute for slower-paced RTS gaming and general use.

Whether you are looking to play on a bigger screen or plug in a plethora of peripherals, the G752 has a full brace of ports.

Both mini DisplayPort and HDMI are here, plus four USB 3.0 ports, RJ-45 LAN, audio in/out and a combo audio jack with SPDIF. There's also a USB 3.1 Type-C port that allows for super-fast data transfers to compatible hard drives, smartphones and no doubt much more once this input/output standard becomes more widely adopted.