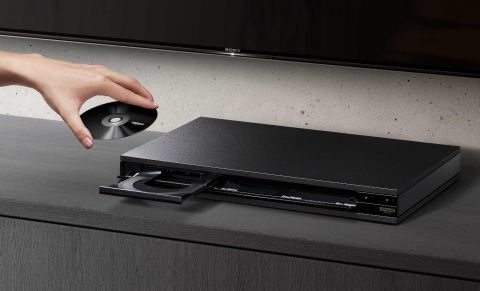 The Sony UBP-X1100ES 4K Blu-ray Player boasts premium build quality, an interest in hi-fi as well as movies, and some excellent picture quality. High-end installers will enjoy its unique system integration features, too. It’s a pity, though, to find such a high-end deck not supporting all of the premium HDR picture formats and complicating its Dolby Vision playback.

Given that 4K Blu-ray players deliver currently the best picture and sound quality available on any home video format, it makes sense for Sony to aim a model at high-end home cinema system installations: Its X1100ES combines a number of unique features designed to make it easier to fit alongside other high-end AV gear in a fully integrated home cinema system.

The X1100ES is able to draw on Sony’s long experience of great 4K Blu-ray picture quality too, making most images especially pretty. Despite getting many things right, though, Sony’s new flagship player isn’t quite the slam dunk we’d hoped it might be.

The lack of physical space inside the X1100ES could be an issue. After all, its high-end rivals aren’t big just for fun; they use their space to keep their internal components well separated and isolated. The X1100ES does, though, feature an impressive metallic and tactile finish, as well as using a frame and beam internal structure to minimise vibrations and electrical ‘cross pollution’.

What’s more, although they don’t have much room to play with, the X1100ES’s disk drive and heat sink both use heavy duty materials to tackle playback noise and overheating.

The X1100ES’s chassis can be fitted with ‘wings’ so that it can slide into kit racks - the first clear sign of its custom install focus.

Connections include two HDMIs, so that you can send sound to your AV receiver from one, and pictures to your display from the other. A front-mounted USB port provides playback of a wide selection of audio video and picture files. Left and right line outs provide stereo analogue audio support, while there are both coaxial and optical digital audio outputs.

Where the X1100ES deviates from the 4K Blu-ray player connectivity norms, though, is with its custom install connections. These include a two-way RS232C port, an Infra-Red input, and CAT 5 support for IP control/troubleshooting via the ihiji4 network management system.

There are two other ‘invisible’ connections, too: Wi-Fi and Bluetooth. The latter includes compatibility with Bluetooth headphones and supports the LDAC standard, which carries as much as three times as much data as standard Bluetooth connections.

Audiophiles may want to note that unlike rival premium decks at similar prices, the X1100ES doesn’t carry surround sound line outs. The need for onboard multi-channel decoding is becoming pretty limited these days, though.

The weak link in the X1100ES’s design is its remote control. This is a disappointingly bog-standard and plasticky partner for such an expensive player. It is, though, easy enough to use. And if the X1100ES enters your home as part of a custom installation system, I guess you’ll be using it via some fancy universal controller from the likes of Crestron.

The Sony X1100ES’s custom-install connections are arguably its most distinctive high-end features. Also important, though, is its expansive disc support. Unlike Panasonic’s rival UB9000, the X1100ES plays DVD-Audio and SACD discs as well as the more predictable 4K Blu-rays, HD Blu-rays, DVDs and CDs.

It can also play 4K Blu-rays encoded in both the standard HDR10 and premium Dolby Vision formats, as you would expect of a high-end player these days, however the X1100ES does not support the HDR10+ video format. HDR10+, like Dolby Vision, also introduces extra scene by scene picture information to help TVs do a better job of their HDR playback. And with more and more HDR10+ content starting to appear and rival Panasonic, Pioneer and (now discontinued) Oppo decks supporting both Dolby Vision and HDR10+, the X1100ES’s lack of HDR10+ coverage feels like a significant shortcoming.

After all, if you watch a stream or disc on the X1100ES that was mastered in HDR10+, you will only get its ‘core’ HDR10 stream, minus HDR10+’s performance-boosting scene by scene data. Unless the disc is one of the mere handful of 4K Blu-rays and HDR streams out there that’s been mastered to support both HDR10+ and Dolby Vision, in which case the deck will default to Dolby Vision.

Even more weirdly, if you don’t turn Dolby Vision off for a non-Dolby Vision disc, the player will output the video with a Dolby Vision flag. Which means your TV will treat it as a Dolby Vision, even if it’s a resolutely standard dynamic range DVD disc! I’ll come back to this in the performance section.

This lack of automatic Dolby Vision detection is a bit of a problem when it’s by no means always clear whether a stream or 4K Blu-ray actually carries a Dolby Vision master.

Bear in mind, of course, that these various premium HDR shenanigans only apply if your TV supports one or other of the HDR10+ and Dolby Vision formats (or, ideally, both). If your TV is only capable of playing the industry standard HDR10 format, you can just leave the Dolby Vision feature off and forget about it. Note in this regard that currently no projectors support either Dolby Vision or HDR10+.

The Sony X1100ES is not just into physical media. It plays 24-bit high resolution audio files, and a good mix of ‘standard’ audio and video file formats. There are YouTube, Netflix and Amazon Prime apps, too. That hardly amounts to a feast of online sources, but it will likely be enough for most people. Especially given that most TVs these days carry their own app collections.

The Netflix and Amazon apps support 4K and HDR, while the YouTube app only supports 4K.

The Sony UBP-X1100ES is for most of the time an outstanding performer. For instance, its pictures look emphatically sharp and detailed with 4K Blu-rays, but also exquisitely clean and, for want of a better word, pure. It seems that the X1100ES’s relatively small chassis hasn’t left pictures open to electrical interference after all.

There’s a sense of solidity, depth and naturalism to the Sony X1100ES’s pictures that both emphasises 4K Blu-ray’s resolution advantage and makes film worlds feel more tangible and intense (so long as you are using a display good enough to unlock the X1100ES’s full potential, anyway).

Colours look vibrant and authentic during dark and light scenes alike, with the impeccable purity of the images again in evidence in both the lack of any mechanically-induced colour noise and the subtlety of the colour tone reproductions.

Motion, too, looks essentially immaculate, even when you’re using the X1100ES’s streaming apps,  while the deck does an excellent job of upscaling Blu-rays and DVDs if you don’t want to entrust upscaling to your TV. Panasonic’s players add a touch more detail and do a slightly better job of handling source noise during their upscaling process, but it’s a close thing.

There’s little to no distracting noise from the disc drive, and discs load exceptionally quickly. We also found the operating system to be stable and slick, despite the main set up menus looking rather rough and ready.

Movie soundtracks appear clean, immersive, and powerful, while music delivered via the X1100ES’s line outs - be it CDs or high quality audio files - enjoys a lovely combination of warmth, clarity and dynamism. This reminds you in no uncertain terms that Sony’s premium ‘ES’ 4K BD deck is designed to be as much a serious audio device as a top-notch video one.

Also helping the X1100ES stand out on an audio level is Sony’s DSEE processing. This is designed to reintroduce dynamic range to compressed music files, and it works remarkably well. MP3 and similar compressed formats sound more open and rounded, less sibilant in trebles, meatier in the bass range and largely free of that muddy ‘hearing it through a wall’ effect that can plague heavily compressed music.

There are, though, a couple of areas where the X1100ES’s performance disappoints. First, the processing option for converting HDR to SDR is a bit of a mess. Shadow details tend to become lost in dark areas, and colours in dark scenes sometimes look really off-kilter. The conversion works better with bright scenes, but previous few movies only feature bright content!

The HDR to SDR conversion issues are potentially a problem for people who own projectors that aren’t comfortable playing HDR (most aren’t!) and so would like to enjoy the 4K resolution of 4K Blu-rays without the HDR.

Finally, when the deck is playing native Dolby Vision 4K Blu-rays with Dolby Vision correctly activated, the brightest parts of the picture can again look ‘flared out’, losing subtle detail and colour information. This is strange given that Dolby Vision is supposed to provide more rather than less light control. But it’s certainly an issue that appears on the X1100ES but doesn’t appear with the same Dolby Vision content on an Oppo 203. Hopefully this is an issue that can eventually be fixed via firmware update.

The deck does boast a few unique features aimed at the custom installation market, though, that should guarantee it an audience - at least when it’s going to be partnered with a display that also doesn’t support HDR10+.

Its AV performance is very strong for most of the time too. Though over-bright Dolby Vision pictures and an ineffective HDR to SDR conversion system may again give some AV fans pause for thought - especially when they’re thinking of parting with $600 in the US or £749 in the UK.