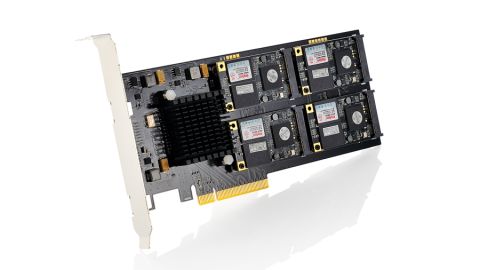 Very large capacity SSDs such as the Kingspec Multicore 2TB drive don't come cheap. Well, OK, that's something of an understatement - they're so eye-wateringly expensive that it's usually only the IT managers in deep-pocketed corporations who won't blanch at some of the price tags attached to these drives. And we suspect even some of them have to look twice.

If you're looking for a very large capacity SSD - "large" in this case meaning 1TB and over - then nine times out of 10 you're looking at a card-based drive with a PCI-Express interface. Leaving aside the huge price tags, it turns out these PCIe interfaced drives are a taste of what's to come for SSDs.

The standard 6Gbps SATA interface has - for SSDs at least - reached the end of its useful life in terms of performance. The rapid advancement in NAND and controller technology means that even mainstream drives are very nearly flooding the 6Gbps interface with data. To progress any further, SSDs need to be hooked up with something that can provide huge amounts of bandwidth - enter the PCI-Express bus.

In all probability though, the next generation of solid state drives will bypass both SATA and PCIe, and will use what's currently called SATA Express. SATA Express will deliver up to 1GB/s via PCIe 2.0 or up to 2GB/s using PCIe 3.0, but the interface has the promise of delivering up to 16GB/s in the future.

Return to the present and we have to make do with the existing PCIe interface, but given the straightline performance that's not such a bad thing. We've already looked at a couple of the Chinese flash experts, KingSpec MultiCore drives (both an early and a current 1TB drive), and now we have the big daddy in our eager mitts: the flagship 2TB MC1S81M2T MultiCore.

You might want to sit down now, because the cost of this 2TB beast is a huge £3,599 (about AU$5,670, US£5,455). In case you were wondering, yes there's a smaller drive in the range - a 500GB model (MC1S81M500) - but even that more modest offering will set you back an eye-popping £824 (about AU$1,300, US$1,250). Considering there are some pretty affordable 480GB drives appearing on the shelves now, you'd have to really need the extra performance provided by the PCIe interface to justify the extra expense.

The 2TB KingSpec uses the same format as other drives, including a 170mm long PCB housing the LSI SAS2008 SAS controller. This is a PCIe to eight-port 6Gbps SAS/SATA controller with integrated RAID support (RAID 0, RAID 1 and RAID 10) using a PCIe x8 interface.

The drive's huge capacity is made up from separate KingSpec mSATA drives mounted to the PCB, via a standard mSATA connector. The MC1S81M2T uses eight of the company's own 240GB drives (four on the front of the board and another four on the rear), each drive using four 64GB 25nm MLC NAND chips and each with its own LSI SandForce SF2281 controller.

While this controller is now getting a bit long in the tooth, and is arguably in need of a replacement, having eight of them packed into one drive does give it some pretty spectacular performance.

Installing the drive doesn't present any real problems though, especially if you want to use it in your desktop machine. To get the best out of it, you obviously need a motherboard with a x8 PCIe slot. In reality, that means you'll need a board that supports a couple of x16 PCIe slots. This is because most boards with at least two x16 slots will have the second slot running at x8 speed, if the first x16 slot has a graphics card in it. The drive will run in slots that operate at x4, but the performance will be reduced.

Installing Windows doesn't present any problems because it doesn't need any extra drivers when going through the loading process, but be warned: the MC1S81M2T doesn't reduce a system's boot time like a normal SSD does. In fact, it increases it. There is also an extra layer of BIOS (the card's own) for the boot sequence to work through.

If the 1TB drive was eyewateringly fast, the quoted performance figures for the 2TB version are quite simply astounding; KingSpec quotes the sustained reads of 4GB/s (yup, that's not a typo) and writes of 2.4GB/s. But - and it's a huge and significant but - we couldn't get anywhere near that read figure when benchmarking the drive. The best ATTO sequential read score we could get was 2.9GB/s, which is a just a tad faster than the MC1S81M1T 1TB drive we tested a while back.

Either that figure of 4GB/s quoted by KingSpec is the figure the drive can theoretically hit, or there's a problem with the firmware. It may even be a case of the SAS controller becoming bottlenecked. We exceeded the quoted sequential read/write figures for both versions of the 1TB drive we tested previously.

At the time of writing, the jury is still out on this one, but our suspicions are leaning more towards the theoretical limit rather than the SAS controller. As it stands, the MC1S81M2T is still the fastest drive we've ever tested when it comes to sequential read performance in the ATTO benchmark.

The MC1S81M2T's write performance, however, is right in the ballpark of what KingSpec quotes for the drive. The ATTO benchmark yielded a score of 2,360MB/s, which - although still staggeringly fast - isn't quite as impressive as the MC1S81M1T 1TB drive's stonking 2,553MB/s.

That's still impressive, but switching over to using compressible test data highlights the difference immediately. The read performance rises to 2,144MB/s, which is a bit of a jump, but nowhere near as remarkable as the rocket-like rise of the sequential write performance almost doubling up to 2,111MB/s.

LSI's SandForce SF2281 controller is getting a bit long in the tooth now and has been left behind in the performance stakes by controllers from Marvell, Samsung and OCZ, but KingSpec's MultiCore drives demonstrate that if you put enough of them in a drive and use an SAS controller to look after the throughput, you can get some pretty astounding throughput rates.

However, the vast difference between the stated Sequential Read performance figure of the MC1S81M2T and the ATTO benchmark figure suggests that either KingSpec has quoted the theoretical figure for the drive, or that the SAS controller has become the bottleneck once the drive gets to a 2TB capacity. Either way, we're still trying to get to the bottom of it.

Like all the KingSpec drives we've tested, the MC1S81M2T isn't particularly good when it comes to dealing with the small, bitty files that make up the day-to-day workload of an OS drive. That can be seen from the 4K random read and write performance results in the AS SSD benchmark. Any number of standard 6Gbps drives can get close to or even better the MC1S81M2T's performance in this particular benchmark, but then again that's the nature of the beast.

It's important to remember that cards like the KingSpec Multicore 2TB aren't really designed for "normal" desktop use, shifting small bits of data around. They're designed for environments where very large files need to be moved around as quickly as possible, such as video rendering, games development or data-heavy server duties.