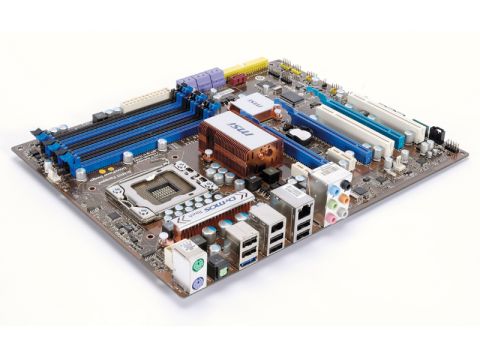 MSI's board is an all-round winner, but skimps on a couple of high-end features

MSI's X58 Pro is proof that, as predicted, the X58 chipset price drop continues unabated. Just a couple of months ago we were reviewing motherboards that cost over £300, now we're getting ones that cost half that price.

By our, admittedly unique, calculations this time next year you'll be able to pick one up and the retailer will give you £12.

MSI's cheapo X58 Pro is virtually identical to the Gigabyte EX58-UD5, save a couple of features and a brown (ooh, retro!) printed circuit board. It comes in at £40 less than the Gigabyte option, but doesn't tick quite as many of our boxes as that motherboard did.

As with all other motherboards these days, MSI has added a few extra bells and whistles to differentiate it from the crowd. There's a bank of tiny switches, like light clickers from a doll's house, that let you alter your CPU clock. It's seriously retro, but strangely appealing at the same time.

In addition, MSI has lowered the temperatures on the motherboard by separating the cooling module for the chipset and MOSFETs. And there's Active Phase Switching, which automatically reduces power based on system loading.

The motherboard stayed very cool when we were testing it, and it all seems to work. In addition MSI has included its GreenPower software, which lets you overclock and underclock every element of the board from within Windows.

The built-in sound is no great shakes, and doesn't compare to the Gigabyte board's in-built Dolby Home Theatre system. It also lacks Gigabyte's handy LED numeric read-out, although the MSI board does include LEDs next to major components, so you can – somewhat depressingly – see which of your hugely expensive additions is failing.

In terms of performance though, the X58 Pro pretty much matches the Gigabyte option, ever so slightly beating it in memory throughput. It's basically a question of whether or not you think the extra features of the Gigabyte board are worth stumping up £40 for, and we think that they are.

Of course, if the credit crunch is wearing out your wallet to the point at which it looks like something the Time Team would dig out of a muddy trench in Warwickshire, it might just be worth waiting for motherboard manufacturers to drop their iterations of the P55 chipset on us later this year. If they're anything like last year's P45 motherboards, you can expect the cheapest to come in at just over £100.

Unless, of course, you are actually building a retro-steampunk PC, in which case the X58 Pro's brown printed circuit board is made of old school win.

Buy from our affiliates: Play.com | Pixmania