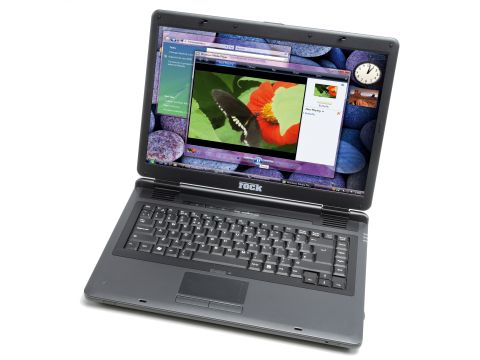 One of the best Vista machines we've seen so far

We've been reviewing Vista-clad machines for a few months now, and the overriding shared factor has been the bugs. In terms of compatibility with older software - particularly games and 3D apps - the Rock Pegasus 665 we received was in the same rather disappointing league.

Its powerful GeForce 7600 Go stumbles through 3DMark06 with graphical glitches and sluggishness abounds, both as a result of Vista's extra overheads and its less-than-complete graphics drivers. Doom 3, one of the last OpenGL holdouts, is its usual jerky, clearly incompatible self.

But all this is set to change. Once Direct X 10 adds decent graphics support to Vista's already capable desktop, and the big graphics cards manufacturers dish out updated drivers, we'll be away. For everything else, the 665 is in a class of its own.

So what of Rock's first Vista attempt? Visually we're quite excited. While Rock as a small-scale system builder doesn't have the budget to spring for the custom cases that make Dell and Sony machines so unique, it does have an eye for class.

The OEM chassis is a perfect example of a well chosen design. It eschews the sprayed silver configuration, seemingly ubiquitous over the last few years, in favour of a much more subtle carbon grey. The trackpad is flush with the rest of the case, and there's even a button to switch it off.

Disabling that secondary mouse pointer while playing games is a pretty much essential task. It's not just for games; any laptop user who has tried to type a long document in Word will tell you.

Rock hasn't dropped the ball on the screen, either. We're tiring of seeing our own reflections in the massively reflective, deeply black display, but there's no arguing with high contrast and extremely bright colouring.

However, X-black style screens usually mean compromises have to be made, and we're in similar territory here. Pressing a couple of fingers onto the top of the case leads to significant image bleed, and the viewing angle is a few degrees short of more expensive panels.

But it's Vista that we're here for, not quibbling about viewing angles. And we're pleased to report that the 665 handles the Home Premium edition with grace and aplomb. With a performance index score of 4.5 (one of the highest we've seen on any PC), the 665 proves itself as a responsive, clever machine.

With its combination of Core 2 Duo T7200 (running at 2GHz) and 1GB RAM, it's an absolute wonder to use, with none of the stuttering or glitching we've seen out of many other machines as we've followed Vista through its infancy.

It feels faster than the MacBook Pro, slicker than Evesham's first desktop efforts; this is the most impressive Vista experience we've had, at least up until the writing of this review.

Many of our fears have been put to rest after seeing the 665. Even if you buy a PC in the next couple of weeks, it's likely that Vista will run happily and give you no more hassle than XP, at least from a clean install. It's not the system-hungry monster it could have been.

With everything configurable it can be cut down, and that extra OS layer dealing with 3D hardware makes a massive difference to your affinity with Vista. We feel connected by Vista's myriad of visual improvements.

Results might not be quite as sweet if you upgrade - that has been our experience thus far - so a new, certified machine seems to be the way to go. For £1,000, you really can't go wrong.