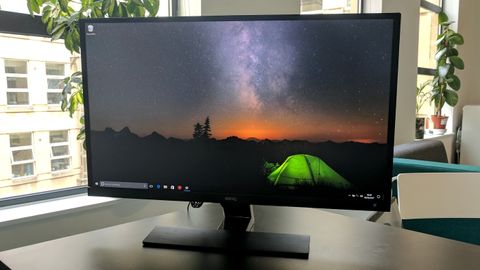 An excellent all-round monitor that offers a huge 32-inch screen, a high 2560 x 1440 resolution and an affordable price tag.

BenQ has an excellent pedigree when it comes to monitors, so to get this size of monitor for that price and from such a trusted name, is incredibly tempting.

The majority of monitors on desks these days are around the 24-inch mark, with some stretching to 27-inches. For a monitor to come in at 32-inches, it means you’ll need to make sure you have plenty of space on your desk.

However, thanks to the simple design of the BenQ EW3270ZL, it isn’t as much of a space hog as you may fear. The large screen size, along with high resolution (2560x1440), gives you plenty of desktop real estate for productivity, and while it’s not a gaming-focused monitor, it should still make games look fantastic on the large screen.

However, it’s quite a bit less expensive than the ultrawide 21:9 aspect ratio monitors that are becoming popular, such as the Philips Brilliance BDM3490UC, which costs £670 (around $960, AU$1,350).

There’s nothing particularly flashy about the BenQ EW3270ZL Eye-Care Monitor, instead it does things with a quiet competency. It’s not quite as fancy as the gold-clad BenQ EW2440, but that doesn’t mean it’s a dull or boring design either. The bezels along the left, right and top sides are impressively thin, and even with the thicker bottom bezel, most of the size of the monitor is dedicated to the impressively large screen – which is what we really want.

The wider bottom bezel houses the control buttons for operating the onscreen display, as well as the power button, a light sensor and the ‘Bright Intelligence’ button. The light sensor is used to detect the ambient brightness of your surroundings and then adjust the brightness and contrast accordingly, which makes using the monitor easier on your eyes – and more energy efficient as well. This can be switched on and off via the ‘Bright Intelligence’ button, but with it switched on, we didn’t notice any jarring changes when the lighting environment changed.

Underneath the bezel are buttons for navigating the on-screen menu, which lets you tweak the display options and other features. This can often be a frustrating experience on monitors that hide those buttons on the underside of their bezels, as you struggle to navigate the menus. However, the BenQ EW3270ZL helpfully displays the functions of the buttons on screen when you press them, making them much easier to use.

The stand is sturdy, but it doesn’t allow you to rotate or change the height of the monitor (but you can change the angle), which is a shame. To be honest, the sheer size of the screen, along with impressive viewing angles, means you shouldn’t feel the need to adjust the monitor – we didn’t – but it would still be nice to have the option without having to resort to balancing it on a pile of books.

To the rear of the monitor are built-in stereo speakers. The fact they are rear facing means there’s a chance sound becomes muffled if the BenQ EW3270ZL Eye-Care Monitor is placed too close to a wall. Still, it’s a fool’s errand to use a monitor’s built-in speakers and expect decent sound quality.

Also in the back are two HDMI ports, a D-Sub port, a Mini DisplayPort, a full size DisplayPort, headphone jack, audio line in, a DC power input and a Kensington lock slot for securing the monitor from theft.

A pretty standard array of inputs, then, but we’d have liked to have seen a DVI port included, alongside (or instead of) the also-aging D-Sub connection.

Over all, this is a nicely designed monitor that doesn’t do anything too fancy – instead it lets the huge screen do the talking.