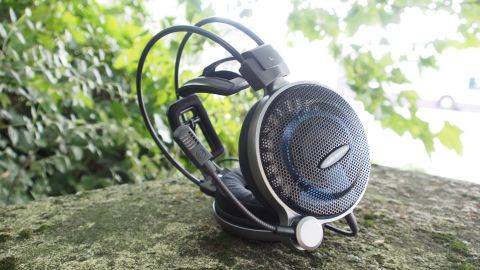 The Audio-Technica ATH-ADG1X is an excellent premium gaming headset for people who think that sound quality is an essential part of enjoying games.

The ATH-ADG1X is the latest gaming headset from Audio-Technica, a company that's held in high regard for its headsets and headphones.

While many headsets aimed at gamers go for flashy designs and virtual surround implementations that offer dubious results, and even more questionable advantages to gamers, Audio-Technica has rather admirably focused on two features that are key for any gaming headset: comfort and sound quality.

With Audio-Technica having over 40 years in the industry, and a history of making critically acclaimed headsets, many people won't be too surprised to see this high price tag, and are likely to think that anything with the brand's name on it is worth the money.

Others, though, may look at cheaper alternatives, such as the HyperX Cloud Stinger which costs a sixth of the Audio-Technica ATH-ADG1X’s price.

The Audio-Technica ATH-ADG1X shows that you don’t need glowing lights, and a design that looks like something Darth Vader would wear when he’s hanging around the Death Star, to have a striking look.

On each ear cup there's a metal grille that not only makes the Audio-Technica ATH-ADG1X lighter that other headsets (and therefore more comfortable to wear), but also shows off some of the hardware inside the cans.

This hardware includes open air dynamic 53mm drivers (most headsets stick to 40mm), and having it on show tells you just how proud Audio-Technica is of its technology, while also looking pretty great.

The insides of the ear cups are comfortably padded and made from a velvet fabric, so they won’t get horribly sticky with sweat when you’ve been wearing them for long periods of time.

On the left-hand ear can sits an easily-adjustable microphone, which has a ‘gooseneck’ design that lets you position the microphone depending on your needs. It also features a supercardioid design and a windscreen for directional recording – so while your voice sounds clear, other ambient noises should be reduced.

The band that sits over your head and connects the two ear cans together features Audio-Technica’s 3D Wing Support. These striking additions sit lightly on your head thanks to hinges, and further help to make the Audio-Technica ATH-ADG1X comfortable to wear.

Gamers – especially professional eSports players – need to wear headsets for long periods of time, so comfort is paramount, and the Audio-Technica ATH-ADG1X’s design does an excellent job of ensuring it's comfortable, while still looking very appealing.

We’d go as far as to say that thanks to the 3D Wing Support design, along with the cushioned pads and lightweight design (the headset weighs 285g without the cable) this is one of the most comfortable headsets we’ve ever worn. If you wear a headset all day, then this one is definitely worth considering.

Unlike some of its competitors, the Audio-Technica ATH-ADG1X is not wireless, and it features an inline control for adjusting playback volume and muting the microphone. The fact that the big switch labelled ‘Mute’ mutes the mic and not the sound may initially confuse some people (it did us).

The thick wire attached to the headset is a bit on the short side (1.2m), so it's good to see Audio-Technica include a 2m extension cable.

This means that if you have a headphone socket easily accessible on your desk you don’t have to have a long and winding wire trailing across it, but if the headphone port is on a PC hidden away from your desk you can add the extension to reach it. It’s these little design considerations that help justify the Audio-Technica ATH-ADG1X’s high price tag.

The Audio-Technica ATH-ADG1X's larger-than-usual 53mm drivers have a frequency response of 5–35,000Hz, a sensitivity of 99dB/mW and 48 ohms impedance. Jargon aside, these headphones offer fantastic sound quality.

We put that to the test by playing Battlefield 1 – a frantic shooter with amazing sound design, where accurate sound reproduction doesn’t just enhance your immersion as you play, but can also give you a competitive advantage.

The ATH-ADG1X worked wonderfully, really bringing to life the sounds of explosions, barked orders and bullets whizzing by you, which all helps to draw you into the game.

We also tried it with a range of other games from a number of genres, and the performance of the Audio-Technica ATH-ADG1X continued to impress. Its audio didn’t have as strong a bass presence as that of other gaming headsets (which often amplify the bass to give a vibration effect), but it definitely didn’t sound thin.

As we mentioned, the Audio-Technica ATH-ADG1X lacks features such as 7.1 virtual surround that other headsets often crow about, but to be honest we didn’t miss it; 7.1 virtual surround isn’t always that impressive to begin with, and the Audio-Technica ATH-ADG1X offers decent stereo separation, which makes for a wide soundscape that keeps you immersed.

As many developers are looking at including binaural technology in their games (particularly for virtual reality games and experiences), virtual surround could soon be a moot point anyway. Binaural sound only needs a stereo headset – which of course the Audio-Technica ATH-ADG1X is.

We also tested the ATH-ADG1X playing music, and the results were again very pleasing. Even if you’re not much of a gamer, there's still a lot to like about this headset.

One thing to note is that due to the open air design of this headset there is some sound leakage – in both directions. That means they're far from noise cancelling, so you can often hear ambient noises while wearing them.

Of course, you can turn up the volume to drown that out, but then people around you can hear what you’re listening to quite easily, which could lead to some annoyed glances in your direction.

A note on volume as well – unlike some USB headsets that control Windows volume, the ATH-ADG1X doesn’t, as it's only connected via a headphone jack. This means you can set the volume to max in Windows, then if you turn the volume up to max using the inline remote you get very loud playback.

Finally, we tested the microphone both in-game, using Skype and simply recording in Windows 10. The sound was crisp and clear, and generally of very good quality, while avoiding picking up too much ambient noise from our busy office.

The Audio-Technica ATH-ADG1X gaming headset is a very expensive set of cans, and for many people that will be a deal-breaker. If you’re just looking for some headphones to wear for a quick blast of your favorite game, these won’t be for you.

This is a premium headset with a price tag to match – but if you’re willing to splash a bit of cash for great comfort and amazing sound to accompany your games both on PC and PS4, then this is a great product that’s worthy of your money.