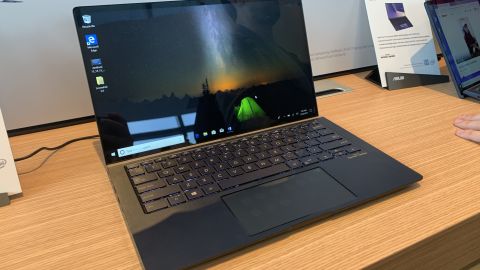 The Asus ZenBook 14 is thin, light and elegant, but the Screenpad 2.0 might take some getting used to. Luckily it's still powerful enough to power through most workloads.

Last year, when Asus released the ZenBook Pro with the Screenpad, we were intrigued. It offered a touchpad that controlled more than just the cursor seemed promising. And, while the first generation had some unique functionality, the second generation of the screen found in devices like the 2019 Asus ZenBook 14 brings even more utility to the table.

We were able to get our hands on the Asus ZenBook 14 at Computex 2019 - one of the several Asus laptops showcased at the event, and it is certainly a compelling Ultrabook. Even beyond the unique trackpad, this laptop manages to pack plenty of power into a thin and light package that anyone would be willing to show off at the local coffee shop.

Asus hasn't shared pricing or availability information for the Asus ZenBook 14. However, the current model of the Asus ZenBook 14 starts at $799 (about £600, AU$1,140), and we don't see the price going much higher or lower than that.

Either way, we're sure the Asus ZenBook 14 will hit the streets soon, and we'll be able to get more precise pricing information when that happens.

Over the last few years, Asus has grown into one of the best laptop manufacturers for anyone looking for a svelte Ultrabook, and the ZenBook 14 definitely continues  this tradition. This thin and light beauty looks amazing, and feels great in the hand. We didn't get a chance to shove it into our backpack, but we're sure that if we did we would have accidentally walked away with it, thanks to how light it is.

The Asus ZenBook 14 is just 0.67 inches thick, and weighs just 2.78 pounds, while managing to fit a 14-inch full HD display. It's incredibly thin and light for a laptop that packs full-fat Ultrabook-class hardware inside.

With the same concentric circles milled into the aluminum chassis that Asus ZenBooks are known for, this laptop looks amazing too. The model we got our hands on is an attractive blue, and looks plenty elegant.

When you open the laptop, you're greeted by a 14-inch Full HD (1,920 x 1,080) display. It's bright and colorful, and should be accurate enough for light creative work. The bezels aren't the thinnest, especially in a world where the Dell XPS 13 exists, but they're not going to stand out either.

Above the keyboard you'll find a soundbar, which is complemented by a pair of speakers on the bottom of the laptop. We're able to hear music when it's played in a crowded room, and it even sounds halfway decent, so audio quality is likely a major win here. We'd like to get it into a quieter room to see what the ZenBook 14 speakers are really capable of, though.

The keyboard itself is well spaced, and even has plenty of travel and tactile feedback – surprising for such a thin and light device.

The real star of the show, however is the touchpad. The Asus ZenBook 14 features the new Screenpad 2.0, which is not only bigger than the last generation, but more feature-rich. Rather than a handful of Asus-exclusive apps, the Screenpad now has native compatibility with a bunch of third-party programs, with Evernote being the most useful.

However, as cool as that sounds, it will take some getting used to. Because of the interactivity of the Screenpad, you'll have to toggle between using it as a regular touchpad and using the unique functionality. We keep trying to use the touchpad only to realize that it's not in "touchpad mode". This is probably something we'd get used to after using it for more than an hour, though.

When we see a device as small as the Asus ZenBook 14, we typically expect to see Intel Y-series fanless processors that are just good enough to handle everyday computing.

However, Asus found a way to include up to an Intel Core i7-8565U, 16GB of RAM and an Nvidia GeForce MX250 GPU in this tiny chassis. Not only does this thing look good, but it should demolish almost any workload you throw at it, short of gaming or hardcore video editing.

We of course can't run our usual gamut of benchmark tests right now, but we look forward to getting the Asus ZenBook 14 in for testing, so we can really see what it's capable of.

Anyone looking for an attractive Ultrabook that can get some work done should take a serious look at the Asus ZenBook 14. It's not the most powerful on the market, or even the thinnest and lightest, but thanks to its full U-series processors and unique ScreenPad, you likely won't find much else like it. Asus continues to knock it out of the park when it comes to design.