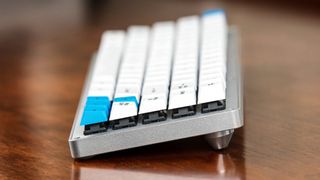 The limited edition Whitefox keyboard, of which only 2000 were initially made, is making a return on Kickstarter where you’ll be able to back one of the highly coveted keyboards for the next two weeks.

They keyboard was first crowd-funded on keyboard enthusiast website Massdrop where it quickly became one of the site’s most popular projects, and one of the keyboard community's most venerated boards.

The keyboard’s popularity stems from its build-quality, customisability, and compact form factor. The keyboard has a solid aluminium housing, durable keycaps, and features mechanical switches attached to a PCB that is fully customisable.

That means you can use the included software to change the keyboard’s layout to whatever you’d like. You can set any combination of keys to handle tasks such as changing the volume of your computer, or even re-assign keys completely if you, for example, have a strong design for your shift key to be where your alt key normally is. Weirdo.

This version of the keyboard is a little different from the Whitefox that originally launched on Kickstarter. For starters, the keyboard now features the ‘Halo’ switches, which have been designed by the folks at Input Club to match the feel of ‘Topre’ switches, the horrifically expensive switches commonly considered the best by the keyboard community.

Two types of Halo switches are available, ‘True’ and ‘Clear’, with the ‘Clear’ switches being slightly stiffer for heavier typists.

Unfortunately, in one key regard the newer version of the Whitefox is actually a step back. The keyboard unfortunately no longer features multiple layouts for different regions, meaning that everyone has to use a layout that’s similar in style to US keyboards rather than UK or European (aka ‘ISO’) boards.

The one choice you’re able to make is color, with the recently announced ‘Nightfox’ offering a darker alternative to the standard board’s bright white and blue color scheme.

This decision was presumably made to keep the cost of the keyboard down. Yes, while a fully assembled keyboard will cost you a whopping $169, that’s actually a great deal cheaper than the original keyboard’s $200+ price point.

So yes, it’s almost certainly the most expensive keyboard you’ll ever buy, but that doesn’t stop it from being an incredibly cool piece of kit that will outlast every PC you buy.

If you’ve been kicking yourself at missing out on the Whitefox the first time round, then you’ve got two weeks to back the project’s Kickstarter.