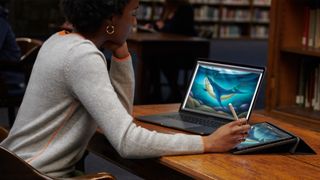 Apple took this year's WWDC 2019 event as the opportunity to make a whole heap of changes to its devices and services, from scrapping iTunes in its new macOS Catalina through to revamping its Maps feature and gifting Apple Watch users with some clever tricks.

There were also some nice surprises for photographers and videographers, whether you're just casually shooting images or editing videos at the highest level. So what exactly is new? Here's everything you need to know.

Own an iPad? You're about to get not just an updated OS, but a completely fresh one developed specifically for the iPad.

It's easier on the eye, and allows you to incorporate widgets into your home screen, but the most exciting news is confirmation that the Files app will allow you to import images from external devices in a far more convenient way than is currently possible.

If you have images on an external hard drive, USB flash drives, memory card or camera, you'll be able to send them through to your iPad and import them straight into Lightroom.

Sidecar lets you use your iPad as a second display

If you fancy a second display for editing but don't quite have the real estate for it on your desk, Apple's new Sidecar feature within macOS Catalina might be the solution.

This lets you use your iPad as a second display, or as your main editing device, leaving your Mac as your secondary display. It's easy to imagine how this would benefit you, whether you're adjusting your images, drawing with the Apple Pencil or editing video.

As you'd expect, it all works wirelessly too, which gives you even more freedom to move and fit your devices around your workspace.

Portrait-oriented lighting and editing has been a huge focus for Apple and its rivals in recent years, and iOS 13 arrives with a sprinkling of changes.

Perhaps the most exciting is the addition of a new High Key Mono option to the Camera app (above), which gives monochrome fans a new way to treat their portraits.

You'll also be able to adjust the intensity of portrait lighting in each of the Portrait-oriented modes. Apple described this as analogous to physically moving studio lights towards or away from the subject, changing the effect on their skin, eyes and so on as you do so.

Those capturing videos on their iPad or iPhone will now be able to edit footage with far more power without having to export their footage elsewhere first.

Not only will you be able to rotate videos when editing, you'll also be able to apply many of the effects that you can currently apply to images to your videos. So, contrast, saturation and so on – but it gets better, as these will be joined by a raft of new adjustments that can be applied to both videos and images, such as Vibrance, Vignette and Noise Reduction, together with filter options.

Apple has made some sweeping changes to the way in which photos are viewed and organized, calling upon machine learning to sort all our happiest moments and sexiest selfies from the random screenshots and other litter we have clogging up our image banks.

So what's new? You'll now be able to have your device sort images into folders for years, months and even days. iPhone and iPad users will be able to pinch into and out of a bunch of images to maximize and minimize them. Live Photos and Time-lapses will even start playing automatically as you're scrolling through a folder.

This all sits within a new Photos app – and the good news is that this isn't limited to your iPhone: you'll see these changes across macOS Catalina and the new iPadOS (below) too.

Apple describes its new Mac Pro as the most powerful Mac ever, and this beastly cheese-grater-esque machine looks set to make editing images and videos a breeze.

It arrives along with a fresh 32-inch Retina display dubbed Pro Display XDR, which boasts a super-high 1,000,000:1 contrast ratio that helps to elevate it above the High Dynamic Range standard to a new Extreme Dynamic Range (XDR) level.

If you're a portrait shooter, and lucky enough to be able afford any of this, you'll also no doubt love the fact that you can swivel the display 90 degrees to make editing portraits a cinch.

... and say goodbye to proxy editing

Editing high-resolution videos often requires you to make proxy files, to avoid having the full-size files bring your computer to a grinding halt, but the Mac Pro promises to make this a thing of the past.

This is thanks to Afterburner, a new accelerator card that allows you to play back up to three streams of 8K ProRes raw video – at the same time.

Not surprisingly, the likes of Adobe and RED have also taken this new beast into consideration in their own developments, with the former company stating that a forthcoming update to Photoshop will fully support the new model's capabilities.