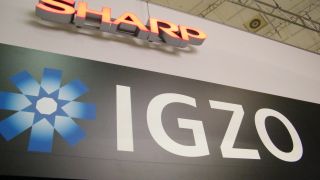 The rumors of Sharp being saved by an investment from Qualcomm turned true Tuesday, as the U.S. technology company has made a deal to become a minority shareholder in Sharp.

Back in November, it was thought Qualcomm and Intel would both offer support to the struggling Sharp, however Tuesday's announcement revealed Qualcomm, through its Pixtronix subsidiary, as the only investor.

There is currently no timetable for the other half of the investment to be paid, but Qualcomm will not provide more cash unless Sharp can prove profitable by the end of the fiscal year.

Qualcomm's investment in Sharp provides the Japanese manufacturer with the capital to continue work on its indium gallium zinc oxide (IGZO) displays, and Reuters reported the two will work together on developing the technology.

Sharp's IGZO LCD screens provide a low-power solution for tablets and smartphones, requiring power only when in use, rather than constantly being active.

The Aquos Pad will be the first device to use an IGZO display, and the 16GB 7-inch tablet is due to arrive in Japan by the end of this year.

Sharp and its partners, such as Apple, have been secretive about whether or not the IGZO displays will be utilized in iPads and iPhones in the future, but technology that improves battery life and screen resolution could help revolutionize the next wave of touchscreen devices.

It's also worth pointing out IGZO LCD technology may not just be limited to smaller screens, and the screens could possibly make it onto television sets down the line.

Qualcomm's investment is a major deal, and could prove to inject life back into the fledgling Sharp as 2013 begins. The company announced in September that it would lay off almost 20 percent of its workforce by 2014.