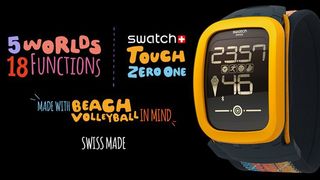 Update: Swatch is done teasing, having fully unveiled its new smartwatch, the Swatch Touch Zero One - and, oddly, it's aimed at volleyball players.

The STZO can track your health and do other smartwatch-y type stuff, but it has a leg up on the competition when it comes to detecting volleyball maneuvers like spikes, bumps and dives, reports A Blog to Watch.

And, just like Swatch promised, the wearable's Swatch battery will go months without needing to be replaced, no charging required.

The volleyball-focused Swatch Touch Zero One may not be what you had in mind when you first heard that Swatch was taking on wearables, but it could be a genius move - what better way to carve out a niche than by doing something so weirdly specific?

When Tim Cook announced that the Apple Watch will ship in April, we felt the collective panic of every other smartwatch maker who realised they were suddenly up against the clock.

We'd consider Google's Android Wear to be Cupertino's biggest competitor right now, but another name has entered the arena. After decades of creating wrist timepieces, Swatch has confirmed that it will launch its first proper smartwatch.

The company told TechRadar that "Swatch will launch a new generation of its Swatch smartwatch in the next two to three months" after the company's chief executive officer Nick Hayek confirmed the same information to Bloomberg.

The Swiss company has an obvious head start when it comes to design, but its wristwear will hit the Apple Watch where it really hurts: the battery. Swatch's device will communicate with the internet "without having to be charged".

The watch will include "communication" (whatever that might be), mobile payments, and apps that are compatible with Windows and Android, said Swatch in a statement. No mention of iOS compatibility.

It will also launch just in time for the Apple Watch, possibly just before. While Swatch calls this the "next generation" of its smartwatch, the first-gen device, the Swatch Touch, is really only as clever as its touchscreen.

In addition to the smartwatch news, Swatch also told us that it will launch a new Swatch Touch at the end of this month.