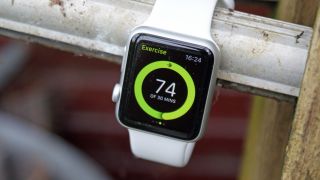 The world of patents regularly turns up interesting and unusual ideas, many of them aren't ready for real world use yet, but they can often point to what we might see in the future and a newly released Apple patent could hint at a very different Apple Watch.

The patent, which was spotted by AppleInsider, details a "wearable display", which would be made of a silicon substrate with a thickness of 50 micrometers or less and would be "conformable" and have the "curvature for a bracelet or a wristwatch".

That makes it sound as though the display could be curved around your wrist and in the process cover a lot more of the surface of the watch than the current Apple Watch design.

Of course this is probably a long way off launching, but it could very possibly be in the Apple Watch's future, as a number of companies are investing in curved tech for phones and wearables.

In fact, it's rumored that Samsung could have a flexible phone as soon as next year.

The patent also suggests more unusual uses for the tech, including sowing a screen into clothes. Smart clothing isn't something Apple currently does and we doubt it would branch out into it, as the company's fairly narrow focus has likely contributed to its success, but it's always possible.