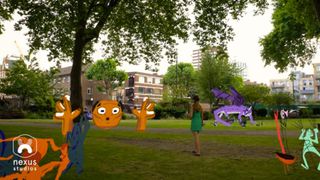 One of the major things that is holding back the VR experience at the moment is the need for external sensors to establish where you are in the physical realm, and translate that into your location in whatever digital location you've been transported to. They add to the complexity of a room-scale set up, and are at least part of the reason why VR has a reputation for needing a complex tangle of cables before being able to enjoy the experience.

As a result, there are headsets in the works from VR industry leaders HTC and Oculus that are attempting to figure out the solution for inside-out tracking – basically allowing the headset itself to sense where it is in space.

One company has managed to beat the giants to the punch however, using an iPhone 7 and Apple’s all-new augmented reality software ARKit. In the video below you can see how Nexus studios manage to use the phone’s sensors to not only get a sense of location, but also map your surroundings:

In effect, this means there'll be no more kicking the cat mid-game when your external vision is blocked by an all-encompassing VR scene, with the AR principles of mapping depth and objects in your surroundings co-opted for an all-digital play space.

Nexus is the first to admit that this is a test, and that it only works at 60 frames per second, which isn’t high enough for fluid head movement. This means it isn’t a complete solution, but it is interesting to see the possibilities that are available with pre-existing hardware.

The ability for a headset to be used independently but also identify its surroundings will obviously mean that a headset can be used in more locations, as you don’t need to install an elaborate set of sensors before using it.

As you can see in the video, it opens up the possibility for well developed and immersive mixes of augmented and virtual reality experiences. Obviously, we'd all prefer it if the AR experience didn't include having a phone strapped to your face (perhaps that's where a pair of Apple augmented reality glasses comes in) but it at least shows that AR is a possibility with kit that people already have in their pockets, and one that could also pave the way for improved VR experiences too.