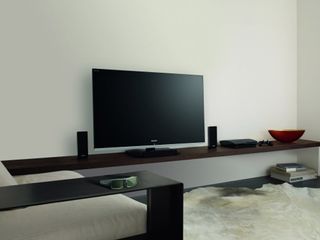 DisplaySearch forecasts that 3D TV shipments will balloon from 0.2 million units in 2009 to 64 million units by 2018, raking in $17 billion along the way. The revolution will be televised. And those with the biggest wallets will enjoy it in 3D.

But what does '3D Ready' mean, and what defines a 3D Ready TV? Samsung's 3D-capable 7000, 8000 and 9000 Series HDTVs, for example, will include a proprietary 3D processor and emitter. These are designed to be compatible with multiple 3D standards, including half/full HD resolution formats and the recently finalised Blu-ray 3D specification.

All of which suggests that the term '3D Ready' is just a catch-all phrase for a less exciting (but more accurate) one – 3D-capable.

While there seems to be no restrictions in terms of TV size, a 3D TV needs a minimum refresh rate of 120Hz (a basic 60Hz displayed for each eye). The higher the refresh rate, the smoother the 3D effect. So a 240Hz set will be capable of outputting 120Hz to each eye.

HDMI 1.4 will also be required for full HD per eye viewing.

Until the broadcast industry settles on a standard, any '3D Ready' badge will need a graphic depicting some fingers firmly crossed.

Blu-ray 3D is the closest that we currently have to an accepted 3D standard. The Blu-ray Disc Association has given the thumbs up to Multiview Video Coding, a variant of the existing high-def H.264/MPEG-4 AVC codec. The world's first 3D Blu-ray disc, Monsters Vs Aliens, was announced at CES 2010.

At CES 2010, manufacturers such as Samsung, Sony and Panasonic all favoured active shutter technology, although these can be expensive and need a power source.