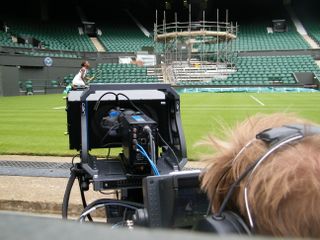 Wimbledon in 3D - just what the tech needs

The BBC's announcement that it is to show Wimbledon in 3D on its HD channel will go down in broadcast history as a game changer for the format.

Until now, 3D's pace in the home has been nothing less than meandering. Whether you place the blame on a lack of content, the current economic climate or even poor consumer awareness, the simple fact is 3D has yet to catch on in the living room.

Sky has tried admirably to get the general public on board with 3D, spending big on premium content for its Sky 3D channel. Its persistence in not giving out viewing figures for Sky 3D, though, isn't exactly a reassurance that the channel is popular. But Sky has always insisted that 3D is part of a much longer strategy; a sweeping statement that can hide all manner of sins.

And it's not just in the home – 3D in cinemas is on the wane. The initial burst of James Cameron's Avatar has partly turned into backlash, with poor 2D conversions and a lack of credible movies putting off Joe Public.

Sure, Herzog's Cave Of Forgotten Dreams and TT3D: Closer To The Edge are movie gems that show there's more to 3D than in-your-face action, but these are sandwiched between big-budget fare that's tagged 3D purely for box office receipts.

What these filmmakers don't understand is that 3D doesn't work if your audience is asleep and their collective eyes are closed.

This is why the BBC's announcement is one that should fill everyone with hope that 3D is here to stay and will become a real alternative to the way we currently watch TV.

The BBC's approach to 3D has been faultless. It has tackled the technology with the right amount of caution. And it has good reason too: we as licence payers are funding the Beeb's 3D Wimbledon adventure. Unlike Sky or Virgin who only really have board members to answer to (and possible angry letters from subscribers), the BBC has to answer to anyone who switches on a television in the UK.

This is where it has to tread a fine line – only a small portion of licence payers will be able to enjoy 3D. Around 200,000 as that's the amount of 3D TVs that have been sold in the UK.

Rather than seeing this as being unfair, though, you have to look at the BBC showing Wimbledon in 3D as laying the foundation for the broadcaster's future.

Not all of us can enjoy the BBC in HD, but you wouldn't want them to stop broadcasting in this format. The same goes for the iPlayer, digital radio and all the other tech innovations the Beeb is part of.

Filming and broadcasting Wimbledon in 3D – with a lot of help from Sony – is part of a special and proud relationship the two British institutions have shared over the years.

Wimbledon has been a test bed for new technologies. Radio, colour TV, even HD – tech innovations have taken centre court at the tournament for 75 years. So it seems fitting that Wimbledon is to be the first subscription-free transmission of 3D in the UK.

Danielle Nagler, the head of HD (and now 3D, a title she picked up earlier in the year), is very level-headed about 3D as a technology, explaining in a keynote in May: "To understand 3D, we need to see if it can truly enhance television. It may be beneficial, but it may well be a gimmick and we need to work together to figure this out."

When that first ball of the women's final is struck 2 July, the small audience that will watch 3D on the BBC for the first time will make their mind up if 3D is a gimmick or not.

Personally, we think it's the (kick)start needed to drive 3D into to the mainstream.