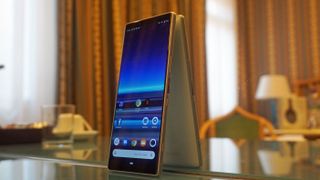 Although there are still no commercially-available foldable phones, nearly every smartphone company has a foldable handset rumored or confirmed to be in the works, and it seems Sony might be joining that ever-growing list with the Sony Xperia F.

The Sony Xperia F, if a report from Chinese website CNMO is to be believed, will be a foldable 5G phone which combines common features of Sony smartphones with some pretty futuristic ideas.

According to the report, the Sony Xperia F will have a 21:9 aspect ratio, like the company's most recent Sony Xperia 1, which suggests it's designed for streaming content like feature films, as most 21:9 phones are.

If the Sony Xperia F is 21:9, it seems likely that the handset will fold down on itself in a 'clamshell' form factor – as phones with this aspect ratio are often a bit elongated, and so the ability to fold it down would reduce its unwieldiness in the pocket.

On top of being a folding phone, the report suggests the Sony Xperia F will be 5G-compatible – this isn't a huge surprise given the Xperia F is said to release in 2020, when 5G phones will be a bit more mainstream, but we haven't heard of Sony working on a 5G phone before now.

It's bears pointing out that the Sony Xperia F name isn't confirmed in any way, although that's what lots of people have been calling it – we all thought the Samsung Galaxy Fold would be called the Galaxy F or Galaxy X before release though, so take the name with a massive pinch of salt.

TechRadar has reached out to Sony to comment on the rumors, and we'll update this article when we hear back.

Before the Xperia F, Sony has still to wow us with the Xperia 1, which it has just released, so expect our full review of that in the coming weeks. Sony's smartphone division has been in a bit of hot water recently with dwindling sales, and it remains to  be seen if the company's commitment to 21:9 aspect ratios will pay off – but if the Sony Xperia F is a novel enough phone, it could be the handset to save the company.