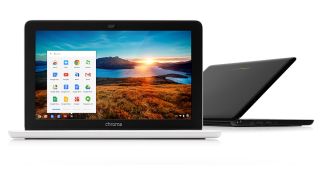 One of the biggest flaws with Chromebooks, the inability to run Windows applications, is about to be fixed thanks to VMware's virtual Windows experience.

The new VMware Horizon DaaS (Desktop as a Service), developed in partnership with Google, lets users run legacy applications from Windows via the cloud. It was detailed in a blog post on Google's Enterprise site.

The virtual desktop is powered by VMware's Blast HTML5 technology. Users will be able to choose between a Virtual Desktop Infrastructure or Remote Desktop Services.

Google is continuing its push to make Chromebooks a major force to reckon with. Chromebooks accounted for 21 per cent of US commercial laptop sales in 2013, according to NPD.

The impact of access to Windows applications is huge. Chromebooks already have an advantage in terms of affordability, speed, and security. Windows software offered over the cloud will make these laptops a more attractive choice not just for consumers, but for budget-minded businesses.

The new product will initially be offered as an on-premise service, but will later be delivered as a managed subscription DaaS solution.