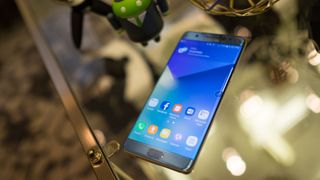 There’s been talk for a while that Samsung would sell refurbished Galaxy Note 7 handsets, and a recent rumor that the phone would launch on July 7 has turned out to be true, with Samsung officially confirming the Samsung Galaxy Note Fan Edition will launch then.

The phone has essentially the same design as the Samsung Galaxy Note 7, but with the new name plastered across the back, and it’s apparently built using “unused” parts.

The battery, which was the troublemaker last time around, has been reduced from 3,500mAh to 3,200mAh and put through Samsung’s new safety tests, and the phone comes with new Bixby software features from the Samsung Galaxy S8.

Otherwise it sounds like the specs will be the same as the Note 7 – though a full specs list hasn’t yet been revealed.

Assuming they are the same you can look forward to a 5.7-inch QHD Super AMOLED screen, a 12MP camera, an octa-core Exynos 8890 chipset and 4GB of RAM.

Or at least you can if you live in South Korea, as that’s the only market Samsung has currently confirmed the Galaxy Note Fan Edition for.

Samsung notes that “overseas sales will be decided later” so it’s possible that the Galaxy Note Fan Edition will be made more widely available, but if you don’t get it where you are you shouldn’t worry too much, after all, the likely much better Samsung Galaxy Note 8 is probably coming soon.