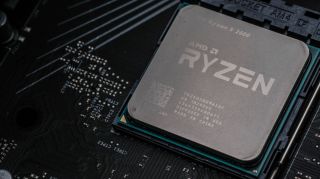 We might end up seeing a more premium X590 chipset, aimed at enthusiasts and overclockers.

AMD's X570 chipset for Ryzen 3rd Generation processors has already been announced, boasting PCIe 4.0 support, and bringing along some pretty expensive motherboards like the MSI X570 Godlike. But now, new premium X590 motherboards have been spotted by German site Computer Base.

The AMD X590 chipset appeared in the BIOS code for the existing X570 chipset, and while we don't have any solid specs quite yet, we could see more PCIe 4.0 lanes, allowing for greater expansion.

And, assuming that this motherboard will also be using the AM4 socket that AMD Ryzen processors have been using since the beginning, we could see motherboard manufacturers include a more robust VRM, allowing for better overclocking. High-end motherboards, like those that would include a premium chipset, are aimed at hardcore enthusiasts, so better overclocking tools are a given.

That's essentially all the information that's out there right now, but given the elevated specs, we could see X590 motherboards getting extremely expensive. We're already starting to see AMD X570 motherboard prices leak out for more than $500 in the US, according to Wccftech.

Still, if you're planning on picking up the monstrous AMD Ryzen 9 3950X, you might want to wait until these motherboards hit the streets – assuming they actually hit the streets, of course.