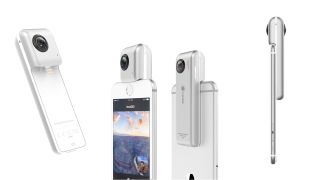 The Insta360 Nano could be just the answer if you're looking to capture 360-degree VR footage without breaking the bank.

Don't worry about faffing around stitching and editing footage either – the Nano does all that for you in real time. And rather than relying on a wireless connection to transmit data between your Nano and iPhone, the Nano is designed to attach directly to your iPhone (6, 6 Plus, 6S and 6S Plus) via the Lighting connector.

Doing this automatically launches the Insta360 Nano app, making it possible to live-stream whatever you're up to. Whether that's doing something cool like jumping out of a plane, or perhaps something more mundane like putting the bins out, that's up to you.

The app also provides simple one-click uploads of videos and stills to your Facebook or Twitter accounts. The Nano features a microSD card slot supporting up to 64GB cards, and a 800mAh battery.