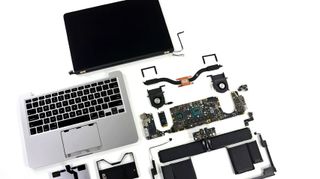 This teardown may give you a tear down your face

The first teardown of the 13-inch MacBook Pro with Retina display indicates that the new, super-slim computer from Apple is slightly more repairable than its 15-inch counterpart.

That's definitely a step in the right direction. In its 15-inch MacBook Pro Retina display review, TechRadar said that the computer was "arguably the least upgradeable or repairable notebook around."

In keeping with that assessment, the 15-inch version scored a repairability rating out 1 out of 10 (10 being the easiest to repair) from iFixit four months ago.

The same teardown team gave the 13-inch Retina a 2 out of 10, which is still a long way from making any computer marked "Retina" user-repairable.

Why the 13-inch is easier to repair

Pulling apart the just-released computer and taking photos in the process, iFixit illustrated why the 13-inch Retina model deserved an extra repairability point.

"[Removal of the battery] took us roughly 15 minutes to complete, without the use of a heat gun," iFixit explained, making it sound easy. "All we needed was a Torx screwdriver and three spudgers."

"In contrast, it took us three attempts to successfully remove the 15-inch Retina's battery without puncturing it, and the third attempt took over half an hour to perform."

Replacement of the trackpad was also less intense.

"We are so excited to see the trackpad come out. Just five screws keep the trackpad in place. You can actually replace it if it breaks, which is pretty much impossible on the 15" model - it's covered by the battery."

In no way easy

The battery, while replaceable in 15 minutes, is still glued into the laptop's top case. This makes replacing a bum battery much more difficult compared to past no-adhesive MacBook Pros.

Fans also require more work. They can't be removed without going through the heatsink, so breaking out some thermal paste is a must, said iFixit.

Repairers who want to go beyond the "Do Not Remove" sticker will also need to deal with the proprietary pentalobe screws, which return from the 15-inch Retina model.

From not easy to impossible

Impossible to upgrade is the RAM, which is soldered to the logic board. As iFixit put it: "It will forever have 8GB of RAM."

Finally, and most depressing of all if you don't have AppleCare, it's impossible to separate the display from the glass since they're fused together.

"The display assembly is almost impossible to take apart," noted iFixit. "If anything ever fails inside the display, you'll need to replace the display as a whole."

This is unlike the iPhone 5 display assembly, which iFixit recently found to be more repairable than the previous two iPhone models.