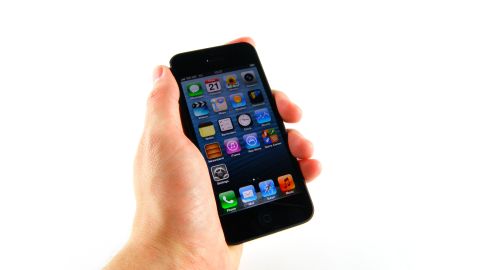 The best iPhone yet - but given the power of the competition and the high price, not the best smartphone.

The excitement of the rumour mill and the titillation of every leaked photo led to higher than ever levels of expectation over the iPhone 5 features, and while the announcement was greeted with some derision at the lack of perceived headline improvements, the record sales tell an entirely different story.

Given the underwhelming changes to the iPhone 4S, the iPhone 5 launch really needed to re-energise customers to prove Apple can repeat the game-changing trick it managed with the iPhone 4.

The iPhone 5 price was predictably high, but it's now four generations old and Apple has stopped manufacturing and selling the handset. You can still pick it up, although you're likely to only find second hand or refurbished – but if you're desperate for an iPhone on a budget it's still not a bad shout.

I'll begin in the traditional manner: how the thing actually feels in the hand. With the iPhone 5 there will be many types of prospective buyer: the upgrader from the 4 (or more-money-than-sense iPhone 4S upgraders), those tired of their Android handset and those taking their first steps in the smartphone market and want to get one of them iThingies their friend/child has.

Well, all of those picking up the iPhone 5 will have the same reaction: this thing is amazingly light, especially compared to the supersized Andrid phones you get nowadays. It's 20 per cent lighter than its predecessor, and tips the scales at 112g.

It's an odd sensation, but it actually detracts from the experience when you first pick it up. I've praised the weighty feel of the iPhone in the past, lending it a premium feel in the face of toy-like phones, and it's almost disappointing that Apple decided to join that clan.

However, through extended use this problem quickly disappears. The overall effect of the phone is still a chassis designed for strength, and so it feels solid, if somehow a little hollow; pleasantly, though, it sits more anonymously in the pocket.

You'll obviously see the change in height too – the iPhone 5 stands 123.8mm tall to allow for the larger 4-inch screen. In truth, those not familiar with the iPhone 4S probably wouldn't notice the difference, which is why it's a good move from Apple to include the larger screen if it's not going put people off that hate larger phones.

The decision to stick at 4 inches is Apple's admission that while it recognises people are all over the idea of having more screen real estate to play with it doesn't want to move away from the thumb-friendly nature of the device. There's still a call for the smaller screen size now, with the launch of the iPhone SE testament to the 4-inch form factor's popularity.

Through a mixture of moving the centre of gravity slightly as well as repositioning the screen within the bezel, it's still possible to scroll your thumb mostly around the whole display one-handed, which Apple is clearly keen to keep hold of.

However, we're not convinced of that argument any more, and it's the first iPhone where comfort to some extent really does depend on the size of your hands. For many people, it is possible to move a thumb around the entire display, albeit with a little more stretching than on previous models; anyone with smaller hands might find the top of the screen out of reach. For everyone, the Home button is harder to access when holding your phone comfortably.

The net result is a curious one: a device that's more pleasant on the eyes and nicer to hold, but frequently more awkward to use than its predecessor. Newcomers might not notice that, but the compromise will be clear for upgraders from the iPhone 4S.

The general construction of the iPhone 5 is excellent, to say the least. We've tested both the ceramic white version and the anodised black, and the two tone effect on the back of the phone is stunning, both visually and under the finger.

It doesn't beat the sheer beauty of the HTC One S, with its micro-arc oxidised back and rounded lines, but it's well-set in second place.

The two sections of pigmented glass at the top and the bottom of the phone add a pleasant effect, and the sapphire glass is meant to be thoroughly durable, to complement the Gorilla Glass on the front.

Apple knows consumers get furious when they drop and iPhone, and is clearly seeking to stop the smashes before they happen with a tougher exterior - although it seems the anodised black version is pretty prone to scratching, with a number of users mentioning chipping on the darker hue.

Phil Schiller, Apple's Senior Vice President of Marketing, reportedly replied to an email from a user pointing out that aluminium will scratch and chip in natural use - and we're also hearing that white iPhone 5 models are being returned through flaking as well.

We kept our black iPhone 5 in a soft pocket in a bag for much of its life, yet saw the following chip with minimal key / coin contact in under a fortnight:

For a device of this premium quality, users will expect it to survive the pocket test, and especially do so for the first two weeks of life. It's a big fail for Apple to expect users to accept that a product can be damaged so easily.

The same industrial band around the outside is in effect again as on the iPhone 4 and 4S, with small sections removed where the antenna joins.

Apple has gone for a more advanced form of antenna here, meaning the days of lost signal are gone, and generally increasing the power of your call connection and GPS lock on too.

There are other big design changes here too: the headphone jack has moved to the bottom of the phone, and the iconic 30-pin connector has been retired in favour of the new Lightning port, giving a headache to all those that have invested in chargers, docks and other accessories over their iPhone lives.

You can buy an adaptor, but it's pricey. And unless you want to keep it permanently attached to the bottom of the iPhone 5 you'll need to buy a few, which is far from ideal.

However, let's not harangue Apple too much for this: a smaller connector is not only easier to use (you can plug the smaller cable in either way round, and the connection feels more solid), but you're rewarded with a thinner and more compact phone to boot. Plus, four years on this is much less of an issue.

There's also a small chink of light on the top right hand side of the iPhone 5 - when the screen is illuminated, you can see it under the band if you really, really look for it. It's been seen by a number of users, but is hard to actually replicate unless you mask the screen and hold it at the right angle.

It's again a sign of slightly under-par machining from Apple, but in day to day use it's almost completely invisible.

The decision to move the 3.5mm headphone jack to the bottom is an odd one, as while it allows you to slip the phone into the pocket head-first when listening to music, which is a more natural action, it's a real pain in the posterior for some apps that will only work in landscape a certain way up.

Using it this way means your headphones experience will be one of having to jiggle the jack around two fingers.

It's not the most comfortable way to hold a phone, and even when using the phone in portrait mode, the jack gets in the way somewhat. Plus it's miles away from the volume keys, which makes it hard to change the audio level in the pocket if you don't use the dedicated headphones.

There are other smaller design changes to the iPhone 5 too, such as the iSight front-facing camera moving to the middle and the home button being noticeably more robust to help reduce instances of a broken portal to your home screen.

But enough about what the phone looks like - the killer question is how the thing feels in the hand. And we'll sum it up by saying: smooth. Some might find it a little slippery (we were always worried we would drop the darned thing), but unlike the glass-backed iPhone 4S, the iPhone 5's unlikely to make a surprise trip off of a sofa and onto a wooden floor of its own accord.

So beyond the slightly odd form factor for those upgrading, and scratch issues for the black model, the design's again extremely strong. For the most part, the iPhone remains a device suitable for use one-handed, although quibblers might grumble whether it's quite as ultra-high spec as it should be - the lock button remains loose, so you can hear it clicking if you shake the phone.

That undoes some of the premium feel Apple's going for, at least if you take to shaking a phone by your ear; more seriously, this device did have a high up-front charge so we'd argue it should be near perfection and free from noticeable (if admittedly small) blemishes.

And while it looks nice, from the front it doesn't really add much to the design of the iPhone - it's certainly not the same as the jaw-dropping design of the iPhone 4 compared to the 3GS... it's another evolution in the iLine. It's not bad, but for those that hoped the iPhone 5 would be another step change there's a good chance they'll be disappointed about the look... until they feel the lovely back on offer.

There was a real chance here for Apple: remove the bezel and give the front of the screen a look that's similar to the OLED TVs from the likes of Samsung or LG… but instead we're treated to the same lines as before.