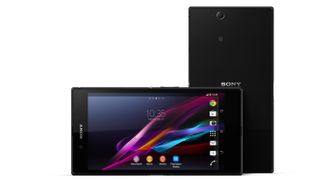 Sony has joined the phablet race, with a new smartphone sporting a whopping screen and ultra-slim dimensions.

The phone features a number of top-end features that will make this a real head-turner when it comes to choosing your next smartphone, not least the Snapdragon 800 CPU that's clocked at 2.2GHz in a quad-core arrangement.

It's also managed to pack in a 6.44-inch 1080p screen while maintaining a 6.5mm thickness - it's hard to explain just how thin this thing feels, but trust us on this one.

In true Sony style the Xperia Z Ultra is both water-resistant (a depth of 1.5m for 30 minutes, or being subjected to 'low pressure jets of water') and dust resistant too - both IP55 and IP58 certified. The headphone port is uncovered now too, in the same way Samsung has done on the Galaxy S4 Active.

Another interesting innovation is the ability to write on the device - which, in itself, isn't much to write home about. But you can sketch or note on the Sony Xperia Z Ultra with a normal pencil, or any 'selected stylus or pen', meaning you can get a decent level of detail when idly drawing pictures of rude things.

The phone will use an X Reality on a Triluminous display - if you're not up on the Sony vernacular, that means it's the same technology as used in the larger Sony TVs as well as an optimised engine that will help re-introduce lost pixels while improving colour reproduction too.

The phone will be available in purple, white and black, and will be running Android 4.2 Jelly Bean under the hood - rumours of it being the first handset to pack 4.3 seem to have been wide of the mark, which is a shame as it won't be here until later in the year.

There's 'only' an 8MP camera on the back, but given the slimmer frame we can understand the tradeoff. It does offer up all the Sony Exmor RS features we'd hope to see on a smartphone from the Japanese brand, so your snaps should be improved with the algorithms packed under the hood.

In true phablet style, it packs on the pounds slightly with a weight of 212g making it almost twice the weight of some modern smartphones, but with the extra screen the difference doesn't feel that marked.

While Sony Mobile has confirmed to Good Gear Guide that it will be heading to Australia, we're still waiting for an Xperia Z Ultra price. It looks like we'll be seeing this on our shop shelves in September or October globally, though an exact date hasn't been announced.