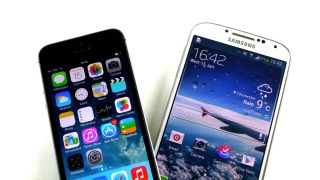 Which flagship has you sailing for the mobile store?

The Samsung Galaxy S4 and the iPhone 5S are devices that highlight the best of two of the largest tech companies at the height of their powers, so which one should you choose?

Each handset has its own strengths, from amazing screens to epic cameras and a whole raft of different features that give each device its own personality.

We've given each our thorough run through in our in-depth reviews, but if you're still a little unsure quite which of these exceptional devices is for you, then this guide is pretty much tailor-made for you.

Gone are the days that the Samsung Galaxy range is accused of being iPhone-esque, with the Galaxy S4 looking quite a lot different than its Apple counterpart.

It is this smaller stature that makes the iPhone sit in the hand a lot easier, making one handed operation simpler on top of making it sit nicer in small skinny jeans pockets.

Apple has followed a seemingly industrial style design with the iPhone 5S, the all glass black (or white) front is almost unbroken, with a subtle hints of the home button/Touch ID sensor, front camera and speaker.

If you opt for the black front, space grey aluminium wraps around the side and the back, with more hints of the black glass present at the top and bottom. The white front options offer the choice of a silver or gold back, as well as a matching ring around the home button.

Samsung, on the other hand, has produced a curvier handset, which also comes in black or white. A silver band around the home button, a silver speaker grille and silver Samsung branding help to break up the front, with the black and white front/back also coming with a faint textured look.

A faux chrome band wraps around both versions of the Galaxy S4's plastic chassis. This construction aids in weight reduction and allows users to access the battery and microSD port, allowing heavy users that like to keep extra battery packs with them to swap them in and out, as well as able to keep multiple SD cards.

Both the iPhone 5S and the Galaxy S4 come with the home button at the base, something that led to numerous comparisons between the original Samsung Galaxy S and the iPhone 3GS. Soft keys sit either side of the elongated home button of the Samsung, whereas, home button aside, Apple relies entirely on on-screen controls.

Part of the reason for the size differences is just how heavily the screen dominates each handset. As with nigh-on all modern smartphones, the screen is very much the focal feature.

This added screen real estate means that it perfect for watching movies, or for playing one of the many games that grace the Google Play Store. Being Super AMOLED as well means that colours come highly saturated, although this can be toned down within the settings menu.

There are many that continue to mock Apple for not (yet at least) building a larger iPhone, but equally there are many that feel larger devices are less suited to making phone calls and also doing things like browsing the web more easily with one hand.