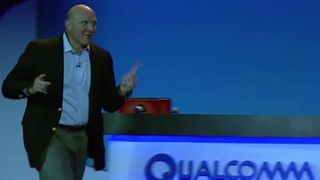 In Volume 3 of our Keitai special we're thanking our lucky stars for classics like these, ensuring the mobile world stays fun, free and just a little bit odd.

From iconic moments in tech, to some of the most peculiar presentations and theatre charging gaffs - sit back, grab some popcorn and enjoy this selection of the weird and wonderful.

We were sitting there, head in hands, thinking 'COME ON, THIS IS YOUR JOB. YOU WERE PRACTICALLY BORN MOBI….'

That was it… Qualcomm's 2013 press conference at CES. Where it hire actors that went so over the top it made you wonder what humans really were. Where Steve Ballmer skipped across the stage. Where Desmond Tutu and a Rolls Royce both turned up.

The iPhone 6 launch was a big deal, but not for the reason you may think. Sure Apple launched its two biggest smartphones to date, but we already knew all about them thanks to the numerous leaks in the preceding months.

No, the real hero of the event was Tommy from Super Evil Megacorp (skip to 19:40) - or as he's more affectionately known on the web, 'Scarf Guy'.

Imagine for a moment that you went out for the day, but you forgot to take your phone with you. It's a scary proposition, and something we wouldn't wish on our worst enemy.

This harrowing video highlights the danger we face every day. It can happen to anyone.

So please, please, please whatever you do, don't leave home without your smartphone. The consequences aren't worth thinking about.

What better way is there to celebrate the launch of your new range of smartphones than to hold a swanky party in London and have your pop star special guest regale the crowd about the time she had a poo in a caravan?

And now ladies and gentlemen, the BlackBerry 7 smartphone collection.

It feels like a lifetime ago now but believe it or not, there was a time when Tim Cook wasn't CEO of Apple.

Here's his first ever launch as the CEO of the company. It was for the iPhone 4S and above is his opening speech for the show back in October 2010.

He says, "I want to welcome you to this room, that we call our town hall. This room, town hall has quite a history at Apple. Just 10 years ago we launched the original iPod here."

Sadly this wasn't where Cook got to launch his next big brand; Apple chose the Flint Centre for the Apple Watch announcement.

We saw ex-Nokia boss Stephen Elop part ways with new employer Microsoft this year, so to celebrate we've dug out an interview he did a few years ago on Finnish TV.

Still boss of Nokia at the time, Elop wastes no time in chucking the host's iPhone to the floor, and then promising to replace it - WITH A NOKIA OF COURSE.

A little treat here for you all, and a trip down memory lane for UK readers, as the infamous Dom Joly takes his oversized mobile phone out and about, reminding us just what it's like to be stuck next to that person on the train.

Simply put, this video is the definition of the worst people in the world. You know who you are.

You know those little crosses at the end of text messages? Turns out they're not kisses to everybody…

Jumping onto the stage before a play begins to charge your phone isn't the best idea. To begin with, you should have your phone turned off during the play, so there's no need to charge it during the show.

There's also the fact that as a member of the audience, you're not allowed on the stage, and climbing up there will get your promptly thrown out.

Finally, that power outlet that's part of the scenery? It's probably fake. The magic of theatre!