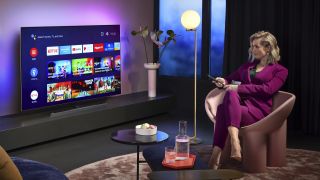 Philips has revealed its first wave of new OLED TVs for 2020 – and it's going all-in on AI picture processing.

Announcing two new OLED models at its annual Amsterdam showcase, the TP Vision arm of the brand gave the Philips OLED855 and OLED805 televisions their debuts.

Essentially identical in terms of specs aside from the style of their respective stands (the 805 has a two-legged "chamfered stand" while the 855 has a central mount), both make use of the fourth generation of the P5 picture processing engine, which this year has been souped-up with artificial intelligence smarts.

Using similar principles to rival brands' AI engines, the new Philips TVs will be able to harness the power of neural networks and machine learning, analysing clips from a database of millions to intelligently tweak the look of whatever you're watching on the fly.

You'll be pleased to hear that Philips is continuing its HDR-agnostic approach to high dynamic range formats, supporting all the major types including HDR10+ and Dolby Vision.

Three-sided Ambilight is onboard, as is Dolby Atmos signal processing – but don't expect to get true overhead-sounding audio from the built-in 50 watt speaker system. Android remains the operating system of choice (in its 9.0 revision), while both Google Assistant and Amazon's Alexa voice assistants will be onboard.

Coming in 55-inch and 65-inch versions, the TVs will release in May, with pricing to be revealed. However, the flagship TV will remain the Philips OLED+984 with its integrated Bowers and Wilkins soundbar however, so expect pricing to be reflected accordingly. And, as ever, the TP Vision-arm of Philips doesn't distribute these sets in North America, unfortunately.