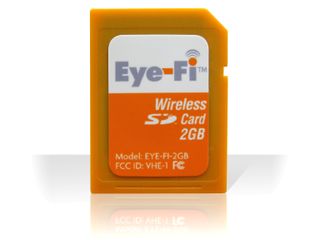 Sometimes it's the small things that say the most. A previously-launched Wi-Fi enabled SD card saw off nine contenders to grab the fifth annual Last Gadget Standing award at CES 2008.

The 2GB Eye-Fi Card looks like a standard SD memory card but features a wireless chip. It wirelessly transfers your photos from your digital camera the moment they're taken, displaying them on a computer or uploading them to social networking sites like Facebook,

There's no need for wires, memory card readers, USB leads, cradles or any other peripherals - the whole transfer process is done over the air.

The clever card isn't new though. It was first launched in a beta version in 2006 and fully launched back in October, but CES 2008 was one of the first times the card has been demonstrated in the wild. Microsoft was also actively using the card in its Windows Vista pavilion at the show to demonstrate wireless photo uploading to the PC.

The Last Gadget Standing competition, hosted by bloggers at Yahoo Tech, nominates 10 finalists and compares which gadget has the most staying power. The live audience at the competition seminar voted on which gadget would make the most difference to their lives.