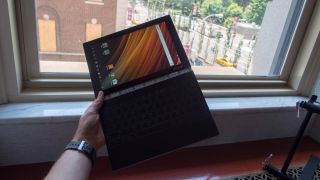 We've seen plenty of tablet concepts that put forth the idea of a dual screen device, but Lenovo is first company to truly realize this dream slate.

Aptly named the Yoga Book, Lenovo's new foldable tablet 2-in-1 combines a traditional 10.1-inch display with equally sized touchscreen while connecting the two with the company's patented watchband hinge. The end result is a device that gives users new ways to touch, type, write and sketch, all while being able to use it as a traditional full-sized slate.

On one side the 10.1-inch Full HD touchscreen operates just like any tablet, giving you a gorgeous display you can control with intuitive taps and swipes. The other side, meanwhile, transforms between a virtual 'Halo Keyboard" and a full-sized touch-enabled area users can interact with directly or with a stylus.

What's more users will be able to use a special ballpoint pen stylus to draw or write down notes a thick pad of paper and transfer everything they've scribbled down into a digital note. This is all thanks to the touch-enabled surface being programmed with 2,048 pressure levels and 100-degree angle detection.

As for internals, the Yoga Book is powered by a 1.44GHz Intel Atom x5-Z8550 processor backed up with 4GB of memory and 64GB of storage – plus an additional 128GB of storage though the microSD card slot.

In an interesting twist, users actually have an option of either going with Android or Windows 10 on the Yoga Book. The choice in OS will also affect how long the device's 8,500mAh battery will last as Android users can expect 15 hours of usage and it's 13 hours on Windows 10.

Lenovo is also expanding its existing line of tablet with the Yoga Tab 3 Plus, which slots itself in as another affordable option for Android users.

Essentially a 10.1-inch screen with a built-in kickstand, the Yoga Tab 3 Plus aims to be your ultimate portable entertainment device. The 2K display comes with a 2,560 x 1,600 resolution and technicolor enhance to really make the colors pop on anything you're viewing.

The visuals are backed up by a four front-facing Dolby Atmos speakers for three-dimensional sound. And thanks to a huge 9300 mAh battery, users can keep on watching media for 18 hours.