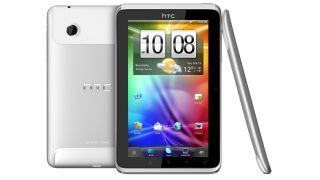 Three strikes, and HTC is out

Just as every other manufacturer is announcing a new handset or tablet, HTC announced it will cease sales of its Android tablets in the U.S.

The Taiwanese company was never a major player in the U.S. tablet market, with only the HTC Flyer, HTC Evo View 4G, and HTC Jetstream releasing stateside. However, all three models are to be discontinued in the U.S.

An HTC representative took a more optimistic view of the company's efforts, telling TechRadar, "HTC is pleased with the results of our first foray into tablets - the HTC Flyer, EVO View 4G, and HTC Jetstream - and like any products in the mobile space that were released some time ago, our tablets have run through their planned lifecycles."

The announcement seems to put to rest rumors of a new HTC tablet on the way - rumors which were already highly suspect to begin with.

And even though HTC is pulling out of the tablet market for now, the company is will not rule out the possibility of re-entering down the road.

"We're continuing to watch the tablet market very, very closely for the right opportunity to re-enter in a way in which we're not just offering a "me too" tablet, but a product that's compelling, differentiated, and inspiring to our customers," the HTC representative added.

Smartphones a success for HTC

While HTC has not had much success in the tablet market, the firm's smartphone efforts are a different story.

Last month, the company announced its Windows Phone 8X, which is set to be the flagship handset for Microsoft's new OS.

On the Android front, HTC recently revealed the incremental One X+ and mid-range One VX smartphones.

A tablet sabbatical will serve HTC well, allowing the firm to focus on its better established smartphone offerings.

With tablet competition heating up between the Nexus 7, upcoming Surface, and rumored iPad mini, it might be safe to bow out of the race for now and wait for the dust to clear.