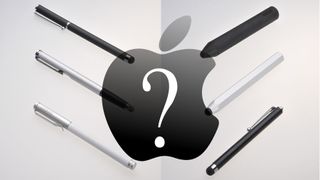 Will Apple REALLY launch a stylus?

The Apple iPen has popped up again showing off more features that will help it become smarter than the average stylus.

Whilst it won't be out to steal picnic baskets the latest patents, picked up by Patently Apple, show that an Apple stylus could be a modular device (in a similar way to Motorola's Project Ara smartphone) so users can pick and choose what they want as well as upgrading features.

Amongst these features are the abilities to project images, work as a laser pointer or transform into a Dictaphone.

Another example suggests a built in camera allowing the stylus to detect movement in the same way as an optical mouse or double up as a scanner.

In-air gestures could also be supported but the use of gyro/accelerometers; the swipe could see the turn of a page or move to a next slide or double as a mouse replacement.

Wireless charging is apparently set to feature in any upcoming iPen, as well as the ability to use standard non-rechargeable alkaline or zinc-carbon batteries. Don't go expecting a 9-volt or D battery though.

The leaked iPen might not be enough to signal an upcoming 12.9-inch iPad Pro, but with each of these features coming with a very heavy professional slant we're not going to bet against an Apple stylus launching alongside a larger iPad.

Either way with the iPhone 6, iPad Pro, and iWatch all set to make their debuts in 2014, we could be about to see Apple's biggest year yet.