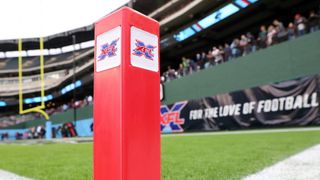 Football fans no longer have to wait until September to watch their favorite sport - the XFL is back! After a 19 year hiatus, Vince McMahon has relaunched his alternative football league and we’re here to make sure you catch every one of the 43 games in the 2020 season - regardless of where in the world you are - with our XFL live stream guide.

The XFL is a winter and spring football league that originally debuted in 2001 but only lasted one season. While its first iteration was known for gimmicks (both on and off the field as it was created by the WWE’s chairman) the relaunched XFL will be "football and football only".

The 2020 XFL season features eight teams that are divided into two divisions. The New York Guardians, DC Defenders, Tampa Bay Vipers and St. Louis Battlehawks will play in the East Division while the Seattle Dragons, Los Angeles Wildcats, Dallas Renegades and Houston Roughnecks will play in the West Division. Each team will play a total of 10 games this season with five games at home and five on the road.

As for the schedule, the XFL season is much shorter than the NFL’s 17 week regular season and there will be 10 weeks of regular play from February to April with four games played per week. After week 10, the top two teams from the East Division and West Division will face off in the playoffs to earn a spot in the 2020 XFL Championship Game on April 26.

Will the relaunched XFL be able to carve out a place for itself and succeed where McMahon’s last attempt at creating an alternative football league failed? Read on to discover how to get a XFL live stream from anywhere in the world.

How to live stream XFL football from outside your country

If you’re trying to watch XFL football from the UK, US, Canada or Australia, keep reading as we have listed all of the ways you can watch every game in the 2020 season on TV or online down below. However, if you live in a country where XFL isn’t broadcast or happen to be traveling abroad when a game you’re trying to watch is being shown, then you’ll likely be unable to view it as a result of geo-blocking.

While you could search the internet trying to find a less than reputable stream from Reddit, we have a better solution. By using a VPN, you can easily change the IP address of your laptop, tablet or smartphone to appear as if you were in a different place where an XFL stream is being shown.

A Virtual Private Network is perfect for this as it allows you to change your IP address so that you appear to be in a completely different location, such as back in your home country where an XFL stream is being shown.

After testing and reviewing hundreds of VPNs, we can easily recommend ExpressVPN as our top pick. It’s fast, safe and very easy to download and use. Also, it’s compatible with a wide variety of devices including laptops, smartphones, game consoles, Apple TV, Smart TVs and more.

Check out ExpressVPN and get 3 months free with an annual plan as well as 49% off its regular price. The service can also be used to help you get around website blocking in certain offices, schools and even countries. Since ExpressVPN uses encrypted tunnels, it will even help keep you safer and more anonymous online.

How to watch every XFL game in the US

Football fans in the US will have plenty of options to watch the XFL on television as over half of this season’s games will be broadcast for free over-the-air.

We’ve listed a few of our favorite streaming services to watch XFL below to make things easier for you, most of which also have a free trial:

How to stream XFL live in the UK

American football fans in the UK will be able to watch the XFL on BT Sport as BT Sport 3 and BT Sport/ESPN will both show XFL games on television. If you’re not a BT Sport subscriber yet, you can sign up for the BT Sport Monthly Pass for just £25 a month to stream all of the network’s content on mobile, tablet, Chromecast, Xbox, PS4 and Samsung Smart TVs.

If you don’t like the looks of a BT Sport subscription, you can also watch XFL on ESPN Player. The service costs £9.99 per month or £69.99 for a whole year and gives you access to every XFL game this season as well as other live sports events, ESPN originals and ESPN Films on-demand.

If you find yourself outside the UK and want to watch the XFL, don't worry about geo-blockers on your account – simply grab a VPN and follow the instructions above to live stream the action.

How to live stream XFL football in Canada

Canadian football fans interested in checking out the XFL this season will be able to watch every game on TSN. The network will show XFL games across TSN 1, 2 and 3 on television but it will also stream some games on its website or on the TSN App.

How to live stream XFL football in Australia

If you live in Australia and want to watch the XFL this season, then Foxtel has you covered as the network will show XFL games via ESPN. However, you will need Foxtel’s Sports Package to watch all the action but you’ll also be able to stream XFL on mobile by using the Foxtel Go app.

For those that would rather just stream XFL online, the over-the-top service Kayo Sports has you covered. It costs between $25 and $35 per month depending on which package you choose and new customers can even take advantage of the service’s 14-day FREE TRIAL. Kayo Sports will show a minimum of two XFL games live per week and it will also show the playoffs as well as the final.