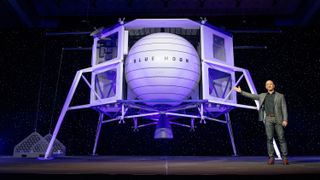 Amazon boss, Blue Origin founder and world's richest man Jeff Bezos has pulled the wraps off his latest project: a lunar lander, which he hopes will help put humans back on the moon by 2024 – and beyond.

The lander, named Blue Moon, will have two variants: the one Bezos presented on stage, which will be able to carry a payload of 3.6 metric tons to the lunar surface, and another that can carry 6.5 metric tons and will be suitable for carrying humans.

Blue Moon will blast off aboard New Glenn – Blue Origin's next generation rocket – and will be feature a new descent engine specially designed for carrying hefty loads to the moon. This engine powered by liquid hydrogen, which could be harvested from the moon's deposits of polar ice.

To go boldly, and affordably

Unlike Elon Musk, whose main focus with his company SpaceX is colonizing Mars, Bezos says that mankind's future is firmly on Earth, and the reason for exploring space is to improve life for everyone back on terra firma.

He says the moon is the key to expanding our reach into space. He suggests that by using the ice at its poles to create rocket fuel, then taking advantage of its low gravity to get into orbit, we could drastically reduce the resources needed to travel further, thereby slashing costs and making more ambitious missions feasible.

Before that can happen, though, the moon needs infrastructure, so Blue Moon is designed to carry all kinds of materials and objects, with customizable fittings for different payloads. It will also be able to handle landing on steep inclines, and the use of hydrogen rather than solar power means it'll be able to keep operating during the long lunar nights.