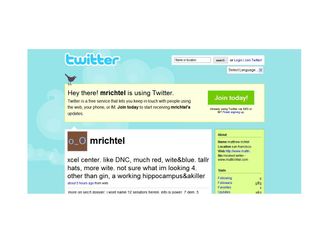 Twitter is now being targeted by identity fraudsters - check your login

Identity fraudsters have been targeting Web 2.0 darling Twitter according to an article on Computerworld.

"The Twitteratti are all atwitter about a phishing scam that hit over the weekend," writes Dan Tynan. "The phishing tweets came in the form of direct messages - essentially private texts only Twitter friends can send and only you can see. Typically the message says something like "Hey, check out this funny blog about you" with a URL attached. The link takes you to a site that looks exactly like the Twitter log in, only the address is twitter.access-logins.com/login/."

Why would anyone want to hijack a Twitter account? CNN news anchor Rick Sanchez recently had his Twitter password stolen. He discovered that somebody had tweeted "i am high on crack right now might not be coming into work today". Britney Spears and Barack Obama have also suffered Twitter-jackings.

As Pete Cashmore on Mashable points out: "Ironically, this may be a coming-of-age for Twitter: nobody phishes where there are no phish to catch. In other words: while stealing passwords is a vile activity, the fact that such attacks are being embarked upon would indicate that Twitter is now large enough to be a viable target."