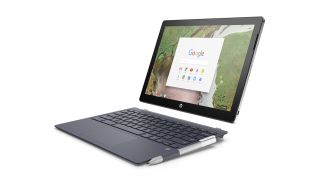 HP has announced a brand new take on the Chromebook that it hopes will give the iPad Pro a run for its money: the HP Chromebook x2. This is a 2-in-1 laptop inspired by 2-in-1s like the Surface Book and, arguably, the iPad Pro, designed to undercut for minimal losses in performance.

The laptop comes with a sturdy, multi-modal keyboard base instead of a flimsy keyboard cover. The base employs a magnetic hinge, similar to what we've seen on the Porsche Design Book One, that is expected to ergonomically hold the tablet portion in place when using the device as a laptop.

Also included in the price is a stylus with which users can access the millions of Android apps available on the Google Play Store, now embedded into Chrome OS. By comparison, the iPad Pro costs way more and doesn’t include the keyboard cover nor the stylus.

Bringing a (big) knife to a gunfight

However, at least on paper, we don’t see HP’s Chromebook x2 going toe-to-toe with Apple’s iPad Pro. The Intel Core m3-7Y30 processor powering HP's Chrome OS slate likely won’t stand up that well against the latest Apple A10X processor inside the iPad Pro. Hell, some of Intel’s latest mobile Core U-series processors don’t throw down with Apple’s latest chips as easily as they used to.

You’re also looking at less onboard storage at 32GB to the iPad Pro’s 64GB, but the Chromebook x2 is backed up by 100GB of Google Drive space for free whereas Apple gives up 5GB of iCloud storage for free.

The HP Chromebook x2 certainly presents a fantastic value and a premium Chrome OS experience, but we’re a little dubious of how well it can compete with the iPad Pro on a pure power and versatility play. We’ll be sure to hold our judgment for a full review – we’ve been surprised before.