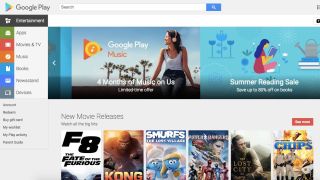 Running now through July 6 for apps, games, books and music and now through July 13 for movies and TV shows in select regions, Google Play shoppers will find prices so good, they may need a pair of sunglasses to view them.

For starters, Google is taking movie rentals down to just $0.99/£0.99/AU$0.99. Though it's limited to one rental per customer, you can choose any title from Google Play's movie library, including new releases like Beauty and The Beast, Logan, John Wick: Chapter 2, and Get Out. Each of these movies and other discounted flicks are normally $4.99 in the US.

Games are also getting big price cuts with up to 80% off. Some standouts include Call of Duty: Black Ops Zombies, Star Wars: Kotor, Final Fantasy Tactics, and Reigns.

If you've been itching to try a new app but don't want to pay full-price for a subscription, Google is also taking 50% off for new, one-year subscriptions for select apps.

These include the NYTimes, Runtastic Running & Fitness Tracker, Memrise, Peak , and Showtime. Who says your brain has to shut down in the summer?

Save on books, music and TV shows

If books are more your bag, then you'll like Google Play's deals on books, ranging from 50% to 80% off. From romance to thrillers to sci-fi, there's a digital paperback for everyone.

During the summer sale, music lovers can nab a free four-month subscription to Google Play Music(two months free in Australia).  Yeah, that's right, four full months free at no charge. After that, it's $9.99/£9.99/AU$11.99 per month.

Like movies, full seasons of Google Play TV shows are also seeing prices drop to $0.99/£0.99/AU$0.99 as well as some show prices being slashed completely in half.

The Google Play summer sale is on now in the US, UK, Australia, Canada and other regions. Be sure to act fast because just like summer, these deals won't last forever.