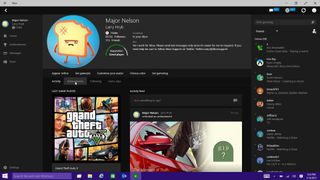 It looks like Windows 10 has been holding out on us. Today, Reddit user OomaThurman found a hidden setting inside the Xbox app on Microsoft's new OS that enables very high-resolution streaming from Xbox One to PC.

"Not sure if this has been posted yet, but i was able to unlock the Very High setting in the xbox app to stream with. I have proof of this working and a diference [sic] in bandwidth (streaming over my wan to the office)," the Redditor wrote. "I can see the mbps change in the xbox app and a dip in throughput on my wan (firewall) when setting it to high instead of very high."

So why did Microsoft bury this setting so deep in the app? Chances are good that Microsoft made the decision to stop new users from streaming at a setting that their networks couldn't support, leading users to believe the system itself was flawed.

The ingenious Redditor agrees: "The difference on just the Smite login screen is about 3Mbps, so i wouldn't recommend this unless you have exceptional networking gear and an understanding of what you're doing."

In order to enable the setting, first edit the userconsoledata in the xbox app folder and change IsInternalPreview to true.

Here's the process in full details:

Console-to-PC streaming is just one of the new crossover features Microsoft has introduced with Windows 10, alongside sharing screenshots and videos across platforms and interacting with friends on either system.