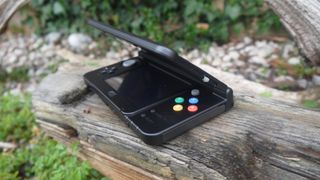 It's hard not to look at the declining sales of handheld consoles and the rise of mobile gaming and not think that the two might be related.

However, the lack of buttons on modern smartphones makes them a pretty poor replacement for a dedicated handheld, especially when it comes to faster-paced action games.

And now that Nintendo, master of the traditional handheld, is moving into the mobile gaming arena with Miitomo and the soon-to-be-released Pokemon Go, it's realising the same thing.

Speaking at a recent shareholder's event a senior Nintendo director said, "Physical controllers for smart device applications are available in the market and it is possible that we may also develop something new by ourselves."

The director, Shinya Takahashi, then went on to speak about the difficulties of developing action games without a physical controller.

The news follows Microsoft's announcement that its new Xbox controller will the PlayStation's Dualshock 4 in being Bluetooth compatible, which will allow it to connect with smartphones in addition to the console and PC.

Although dedicated controllers have been available for smartphones for some time they have never been able to match the quality of first-party controllers and have never really taken off, leading to most smart-phone games being designed exclusively with touch input in mind.

But if Nintendo's proposed controller is released and is successful, it could usher in a new generation of smartphone games that brings back the kind of experiences that were common on the handhelds of yesteryear.