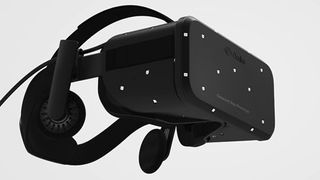 Prepare to be tested...

With E3 just around the corner, and liable to be lousy with VR, hardware testing aficionado, Futuremark, is set to release an independent benching tool for virtual reality headsets.

The 3DMark maker is creating VRMark in the hope it will become the industry standard for testing the myriad head-mounted virtual reality sets about to flood the market. With the heritage of both its 3D graphics test, and its popular PCMark application, it's got a damn good chance.

VRMark will provide a set of tests to cover a wide range of content from still shots through to games and video.

The new test, scheduled for launch later this year, will mainly be designed for benchmarking a given device's capability of holding the consistently high frame rates. It's this level of consistency which is key to maintaining a good VR experience.

Also known as an experience which doesn't make you void your guts all over the floor.

Smooth frame rates are vital, but then so is frame latency and responsiveness - something else VRMark is all set up to test.

Futuremark is encouraging participation in its Benchmark Participation Program for the manufacturers of VR sets so the different companies can have access to the software's source code and understand its various workloads.

In the past that sort of thing has lead to accusations of companies gaming the system in old versions of graphics card benchmark 3DMark. Futuremark is though using a government-vetted development process for neutrality to avoid such issues.

For Futuremark it's the huge growth in the market which has prompted the company to create VRMark.

"There are already more than a dozen different head-mounted displays for VR at various stages of completion. Analysts forecast that VR will reach 10.8 million users by the end of 2016. But delivering a great VR experience relies on overcoming significant performance challenges," said Jukka Mäkinen, Managing Director at Futuremark.

VRMark is set to hit our test benches this year, along with some key players in the hardware side of things. We sure are looking forward to getting some Oculus dev kit action up against HTC's Vive for a bit of a battle royal…