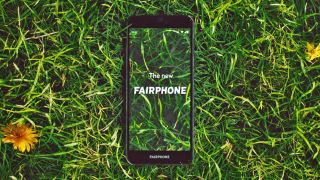 Eco-friendly smartphones are a sadly under-represented niche, but there's one company making sustainable phones, and it's just released its newest device – the Fairphone 3.

The Fairphone 3 is the successor to the Fairphone 2 (obviously) from Dutch start-up Fairphone (equally obvious), that uses sustainably sourced materials, decent factory working conditions for employees and recycled parts, to create modern smartphones.

These are issues that some other smartphone companies perpetuate, so if you care about the planet (and your fellow humans), Fairphones are worth looking into. So what can you expect from the Fairphone 3?

It has a 5.7-inch Full-HD display, and the same chunky design as previous Fairphone handsets - it's not the slick, premium aesthetic we've become accustomed to in the mid-range these days.

It comes with a rear-mounted fingerprint scanner, a new feature for the brand, and the same modular design as its predecessors – this means you can easily take it apart if one part breaks, and you don't have to rely on repair shops.

The device has an IP54 protection rating, which gives it limited protection against dust and splashing but not immersion in water or too many particles. While the Fairphone 3 comes from the ground, you might want to be careful in case it returns there.

The Fairphone 3 comes with Android 9 onboard, which is the newest available Google operating system. Also, it has NFC, which is a useful feature for people who like to do banking on their phone. The device runs on Snapdragon 632, a decent mid-range chipset which should provide enough power.

Another slightly disappointing aspect is photography, with the Fairphone 3 packing a single 12MP rear camera and 8MP front-facing snapper.

These are fairly low-end camera specs, and in general the Fairphone 3 resembles an affordable smartphone, down to the 3.5mm headphone jack which many high-end devices have dropped.

The Fairphone 3 has a USB-C port, but there's no charger or USB-C cable included in the box, so you're going to need to already own one. There's a 3,000mAh battery too, with an unspecified level of fast charging. This battery is removable, unlike nearly all other smartphone power packs, which is part of the aforementioned modular design.

That price is for a device with 4GB RAM and 64GB internal memory, which can be expanded with a microSD card.

You can pick up the phone in the UK from Sky Mobile currently, and we'll let you know if more carriers in various regions join that list.

The Fairphone 3 has a reasonable set of features, but faces tough competition from the 'affordable flagships' from the likes of OnePlus, Honor, Oppor and Xiaomi at its mid-range price point – but when you consider the cash you spend goes to making a more sustainable phone with better working conditions for the people who make it, is that not better than having more cameras or higher-end specs?

TechRadar is going to bring the Fairphone 3 into its labs soon to see how well it truly runs though, so stay tuned for our full review.