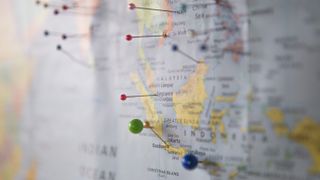 Photo by Capturing the human heart on Unsplash

Google, Ford, Uber, Tesla – private companies are racing to develop self-driving cars, using whatever maps and sensor data is available. The fierce competition pushes technology ahead, but it could pose a risk to society if companies are working in siloes.

We spoke with Miranda Sharp, innovation director at Ordnance Survey – the UK’s national mapping agency, which is working with the government to build a national infrastructure and testing regime for connected and autonomous vehicles.

She explains that as things stand, there’s no consistent, secure way for cars to share safety-critical information, which means a worse experience for everyone – potentially defeating the point of self-driving cars.

“At the moment, it seems that vehicle autonomy is being pursued by vehicle providers, and you can have a dystopian or a utopian view of this,” she says. “In a dystopian view, we all have all the mobility we need. So any time I want to press a button on my phone and a little taxi comes along, picks me up and whizzes me to wherever I want to go.

“But you can imagine, if we all had that, we’d all just spend our whole time in traffic. There would just be lots and lots of pods [...] circling around outside the shops or wherever people are, waiting for them to come out and need to go to the next place, and traffic would just grind to a halt.”

Do self-driving cars even need maps?

Ordnance Survey’s journey into the world of autonomous driving started a couple of years ago. The agency was involved in some research into the way people interact with self-driving vehicles, and realized there was a lot of debate about whether or not autonomous cars actually need maps at all.

In Sharp’s view, the answer is definitely yes. “The technology simply isn't there yet to do it all by sensors,” she explains, “and so they need some degree of knowing where they are.

“When you’re talking about autonomous driving, that distance can make quite a significant difference – particularly if you risk being bounced across the bonnet.”

Even with maps, there’s the question of how to share data collected from vehicles’ sensors in a secure, reliable and consistent way – pulling out only the safety-critical data and gathering information on journeys rather than people.

“What’s going to be the output of that data?” Sharp asks. “How might it be usefully used? How do you find the needle in the haystack?

“If you imagine that you’ve got however many cameras around each connected vehicle taking pictures and consuming data, you need enormous processing power just to process it, and then compare it with what you thought you were going to see, find the thing that you weren’t expecting to see, and work out how material that is.”

After those early conversations, Ordnance Survey got involved in further research with PETRAS – a multi-national research study on privacy, ethics, trust, reliability, authenticity and security.

As Sharp observes, the UK (like every other nation) doesn’t have a mature way of handling data. It doesn’t appear on any company’s balance sheet, and is often thought of as free – but data transactions will be critical to autonomous driving.

“You want to be able to track journeys so that you can put necessary infrastructure in place, but you don’t necessarily want to track people, so what techniques are you going to put in place to support that sort of transaction, or transaction journey or activity?” she says.

This doesn’t just apply to autonomous cars, but to connected cars as well – which are already mainstream. As Sharp notes, automation is something that’s happening by degrees.

“And then you get into a debate quite quickly as well, about what you do if not all places are connected,” she says. “What about the roads in between connected places – do they have to be connected? Because the telephone companies would say that isn’t worth their while in terms of investment.”

Ordnance Survey wants to a test a neutral, company-agnostic way to compare connected driverless and connected cars, so they can share safety-critical data to make traveling better – and safer – for everyone.

“The important thing there [is] safety-critical,” says Sharp. “So if you’re driving a Porsche, you might consider sitting in a traffic jam unacceptable, and you might like a service that helicopters you to the next port, or whatever. That’s not safety-critical information. There will be services on top of a safety-critical infrastructure, but how do you know if a sink-hole opens up, for example, that all the vehicles [will] avoid it? Not just the ones on the Google System or the Apple system – all of them avoid it, and all the traffic lights support the decisions so that nobody goes down the sink-hole.

Although Ordnance Survey is focused on the UK, it’s working to international standards and protocols, so any resulting system should be possible to export internationally.

“The advantage that the UK has in this market is that we don’t have a dominant player, Sharp says. “So we’ve talked to the automotive council about this, and if one was to do it in Sweden, for example, you’d start from a Volvo perspective, whereas if one was starting in Southern California, you might start from quite a different perspective.

“The advantage of starting it from a quasi-government position is that you’ve got the opportunity to be neutral. Because we’re doing the research, we’re not going to enter the market of the car provider or mobility service provider. We are there, and always have been, to help people understand where they are, the context of where they are, and the safety of doing what they’re doing.”

Autonomous cars don’t have to result in dystopian gridlock – provided carmakers are willing to break out of their siloes.

“Unless there is some check on the market-drivers associated with driver replacement, we risk that dystopian future. And so we will have missed out on the goal of autonomy.

“If the goal of autonomy or a connected vehicle is travelling becomes a joy, we won’t have got it – it won’t be a joy; it will be a great chore.”