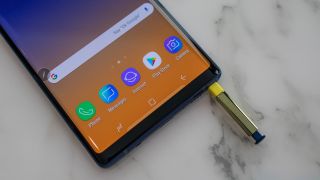 With a starting price of $1,000/£899/AU$1,499 that climbs if you opt for more RAM and storage space, the Samsung Galaxy Note 9 is at the highest tier of smartphone pricing, and you'll probably want to keep it safe.

There's a lot of glass in the Note 9, which can be worrying for many, so you’re probably going to want to secure the phone in a case to keep the front and back in one piece.

Thankfully, there are already loads to choose from. But be aware that they’re not all made equal, and sifting through to find the best is hard work.

So we’ve done all the labor for you with this list. All the cases below look to be great choices and we’ve included a range of styles and price points.

A final caveat: while we’ve researched these cases, we haven’t gotten to test every one, so we've collected some interesting cases from trusted brands.

Note: we've ranked these from cheapest to most expensive according to prices at time of writing.

The Ringke Fusion Case looks to be a good option if you’re feeling a bit poor after your Note 9 purchase and don’t want to shell out too much on a case.

But while it’s cheap and might look a bit flimsy it should actually do a solid job of keeping your phone safe, as the Ringke Fusion case has cushioned corners and offers MIL-STD 810G - 516.6 Certified Military Grade Drop Protection.

It also comes with a wrist strap, and the case is transparent, so you can fully see the Samsung Galaxy Note 9 through it.

The Olixar Sentinel Case puts protection first, with a tough yet flexible design that’s built to absorb and deflect shocks and impacts. It’s also made to be easy to grip, and the case itself should stay looking pristine thanks to an anti-scratch and anti-fingerprint design.

The rugged looks could prove divisive, but the Sentinel Case does have some nice design details in the form of carbon fiber and brushed metal effects.

And you get more than just a case here, as the Olixar Sentinel also comes with a tempered glass screen protector, so you can keep the front of your phone as safe as the back.

The Spigen Tough Armor Case looks to live up to its name thanks to air-cushioned corners and dual-layer protection, keeping the back and sides of your Galaxy Note 9 safe from damage.

The screen isn’t covered here, but there is the expected lip around it to offer some protection and despite being tough – and even packing in a kickstand - the Spigen Tough Armor also manages to be slimmer than you might expect.

The design is perhaps a little plain and like most cases the build is plastic, but you can at least get the case in a handful of different colors, to match or contrast your phone.

This wallet case from Snakehive might seem expensive, but it's not too bad given it  made from leather.

As well as looking great it also offers a fair amount of protection, as unlike most cases on this list it keeps the screen covered most of the time as well as the back and sides.

And this is a dual-purpose case, because it also has slots inside for cash and cards, letting you leave your wallet at home, so you don’t have to stuff your pockets.

Want leather but not a wallet? Then your options are limited, but the Krusell Sunne Cover should suit your needs.

Available in nude, black, cognac or red, this leather case just covers the back and sides of the Galaxy Note 9, meaning it’s slimmer than most wallet cases and the screen is always at the ready – though also less protected.

It looks good and suitably high quality for a phone as expensive as the Note 9, though it doesn’t go as far with its protection claims as some cases, so you might still want to treat your phone like the highly priced piece of fragile tech that it is.

Being an official Samsung case this is unsurprisingly expensive, but it’s also a bit different to most cases out there, as the Samsung Clear View Standing Case has a transparent flap on the front, keeping the screen protected without stopping you from seeing notifications and the time.

The case can also fold out into a stand, making it handy if you plan to watch any lengthy video content on your Note 9.

And the front flap also apparently doubles as a mirror when not in use, which could be a pro or a con depending on how happy you are to be confronted with your own visage.

A stylish, unusual and quite expensive option

Another official Samsung case, and this one is even more expensive. The idea is similar to the case above, with a front flap that lets you see your notifications, but the implementation here is slightly more stylish, as rather than being transparent it’s got a fabric-like look that allows your notifications to appear like an LED dot matrix.

That look extends to the back, making it a much more interesting and less plain case than the Clear View one, and it also benefits from a credit card slot tucked away inside.