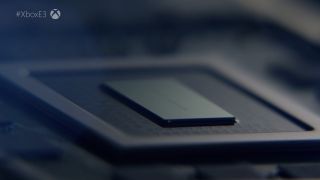 As expected, Microsoft officially announced the next generation of Xbox – currently known as Project Scarlett – at E3 2019, with a trailer that was supposed to whet our appetite, make us forget about Sony’s upcoming PS5, while also remaining coy about any specifics.

I don’t know why I watch Microsoft’s events each year (OK, I do – it’s my job), but I always start out with a bit of optimism that this year it will finally show me something that will make me want to rush out and buy an Xbox. Once again, it failed.

The details Microsoft did reveal about Project Scarlett were laughably thin – and it seemed like it only wanted to prove that the next Xbox could compare with the PS5.

So, we got the promise of a custom AMD SoC powering Project Scarlett (like the PS5), the use of an SSD to speed up load times (like the PS5) and oodles of graphics memory (like the… you get the picture).

If both consoles do end up being so similar, customers will be faced with choosing the platform that offers the best games. In this fight, Microsoft has no chance against Sony, despite it hoovering up a load of games developers, the latter still has the upper hand when it comes to exclusives.

Of course, any games Microsoft does publish will come to PC as well – which is great for PC gamers like me, as it means once again I won’t have to splash out on an Xbox.

The fact that Microsoft bought Double Fine – one of my favorite game developers – would have seriously annoyed me if they were made to make Xbox-only games. However, as long as their games keep turning up on PC, I’ll be happy.

I’ve gone over why Microsoft’s decision to make all of its games available on PC and Xbox means I’ll never need to buy an Xbox in the past – but if Microsoft showed off a genuinely innovative console that really pushed hardware boundaries – I might be interested.

It’s still early days, and Microsoft could reveal a hitherto undisclosed innovative streak for Project Scarlett later on, but at the moment from the little we know, it’s not going to blow away many PC gamers.

It’s great that the console makers are finally embracing SSDs – though of course, that probably means these consoles aren’t going to be cheap. But PC gamers have been benefiting from SSDs for millions of years now (slight exaggeration).

The custom SoC from AMD is more interesting, and the fact it will be using its upcoming Zen 2 and Navi 7nm architectures would be exciting – but Project Scarlett is coming out holiday 2020, and by that point those architectures should have been out in the wild for a while.

While Microsoft was especially cagey about the specifics of Project Scarlet’s hardware (and it continued to avoid revealing anything more when we spoke to Microsoft's corporate vice president of gaming engineering, Liz Hamren after the show), there’s a few hints at what we can expect.

In the reveal trailer, Microsoft claims that "from a pure processing perspective, [Project Scarlett] is four times more powerful than the Xbox One X".

Now, that might seem impressive, but I couldn’t help but notice Microsoft’s careful use of language there – it doesn’t mean Project Scarlett is going to be four time more powerful than the Xbox One X overall, just that its processor will be four times more powerful.

Total output from the complete console could be less than a 4x improvement versus the Xbox One X. And considering that the Xbox One X’s processor was arguably its weakest link, being based on AMD’s aging Jaguar microarchitecture, suddenly that leap in power isn’t quite as impressive.

At the reveal, Microsoft suggested that Project Scarlett will be capable of 120FPS and 8K resolution. Again, it was careful with the phrasing, so while it could seem like it was promising 8K at 120FPS (frames per second), that’s likely to be rare – if it's even possible.

We won’t see graphically demanding games at 8K and 120FPS for a long, long time – and it would be overkill for most people anyway, especially console gamers who are playing on 1080p 60Hz TVs.

If (and it’s a big if), there are 8K, 120FPS games, they will likely be very simple when it comes to graphics - the hardware simply wouldn't be able to cope with more taxing graphics at this level.

So, the hardware hasn’t got me excited. What about the games? Microsoft certainly showed a lot of games, but the ones that looked the best – and the most exciting – were mainly 2D indie games like Ori and the Will of the Wisps – which will run on Windows PCs, and certainly won’t demand an expensive new console to play on.

Microsoft also announced that Halo Infinite will be a Project Scarlett launch title, but it did this by showing a pre-rendered CGI movie. How much better would it have been to see a hint of gameplay to suggest what Project Scarlett is capable of? It certainly didn’t look next-gen.

I worry that Project Scarlett will repeat the mistakes of the Xbox One X, with Microsoft launching powerful hardware without the software to justify it.

I hope I’m wrong – and Holiday (November/December) 2020 is a long way off – but at the moment, Microsoft once again failed to provide this PC gamer with any reason to buy an Xbox console.