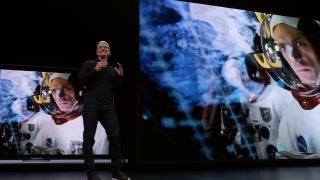 Apple is now expected to release not only a new 16-inch MacBook Pro, but also an iPhone Pro with massively upgraded cameras, new iPad and iPad Pro models, as well as a new Apple Watch 5 before the end of 2019, Bloomberg reports.

The news comes mere weeks ahead of the anticipated September Apple event, during which we are banking on seeing a new range of iPhone 11 models. Now, chances are high we'll see much more during the show.

Beyond that, Bloomberg's anonymous sources also say that Apple is working on new models of its AirPods that will be more premium and therefore pricier, as well as a new HomePod, for an early 2020 release.

iPhone 11 could be a bigger deal than we thought

There is an absolute ton of details to dig into, so let's begin with the new iPhones. Before today, many expected the 11 series of new iPhone models to be a rather lukewarm update. That does not now appear to be the case at all.

According to Bloomberg, there will be three new iPhones for 2019, with two 'Pro' models to succeed the current XS and XS Max models featuring three-sensor rear camera arrays and a new XR model.

This new camera array on these Pro models will reportedly allow users to capture ultra-wide angle photos and video as well as photos in an even more enhanced high dynamic range (HDR), now that three photos can be taken at once and digitally merged with enhanced software.

Finally, this camera array will approach image resolutions and video recording capabilities rivaling that of professional hardware, complete with improved software that can edit content as it's being captured or recorded.

The new Pro iPhones specifically will also gain the wireless power delivery feature  made popular by the Samsung Galaxy S10. This will allow these higher-end iPhones to wirelessly charge other devices, like other iPhones or the AirPods with the wireless charging case.

These Pro iPhones will look identical to 2018 XS iPhones from the front, with the screen resolution and camera notch unchanged. However, some color options will feature a matte finish in the back as opposed to today's glossy plastic.

More invisible changes will allegedly include a Face ID camera with a wider-angle sensor that can be used even when the iPhones are flat on a table, vastly improved water resistance and new OLED displays with Haptic Touch instead of Apple's pressure-sensitive 3D Touch technology. This last feature works exactly how sustaining a finger press on an iPhone XR works.

Apple's next iPhone XR will feature a second camera that is capable of optical zoom as well as an enhanced portrait mode; it will also be available in green.

At long last, all of the new iPhones will reportedly feature faster A13 processors that contain a new AMX component that can handle math-heavy computing tasks generally associated with augmented reality. And, of course, none of them will feature 5G connectivity – it looks like that will be the iPhone 2020's big feature.

Bloomberg's reporting supports previous reports that Apple plans to debut a 16-inch MacBook Pro this year, possibly during its September iPhone event. This MacBook Pro will actually be closer in size to the existing 15-inch MacBook Pro, thanks to slimline bezels that will finally be featured in Apple's laptops.

Of course, this is the latest attempt by Apple to win back professional users – accompanied by the imminent launch of the new Mac Pro desktop.

As for iPad, Apple apparently plans to update both the iPad Pro models and a new entry-level iPad intended for schools and budget users. Both the 11-and- 12.9-inch iPad Pro models will receive better cameras and likely the A13 processor inside.

However, the cheapest iPad will be bumped up from 9.7 inches to 10.2 inches, finally sunsetting the 9.7-inch screen size from Apple's tablets since their debut way back in 2010. Bloomberg, sadly, has no other details on the new iPads, Pro or otherwise.

Apple Watch 5 and products slated for 2020

Finally, will reportedly launch the Apple Watch 5 before the end of the year, most likely at its September event. This new model will be a minor upgrade, focusing on new case finishes, like ceramic and titanium, and optimizing for watchOS 6 coming soon as well.

The aforementioned new AirPods and HomePod are allegedly being set up for 2020 launches. These newer AirPods will be more expensive than today's, bringing water resistance and noise cancellation to sweeten the deal.

At very long last – this has been a massive leak, hasn't it? – Apple's 2020 HomePod speaker will reportedly feature just two tweeters, down from the seven in the current model. It's unknown why this change is happening, but perhaps it's to focus on other features.

All told, it's looking like either Apple's September event will be absolutely massive or we'll be seeing Apple more than once on the keynote stage before the end of the year. Either way, Apple is clearly looking to end 2019 with a fireworks finish.