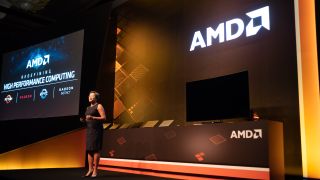 Computer processor manufacturer AMD did not have a great start to the financial year, and cryptocurrency may be to blame.

AMD has just published its First Quarter 2019 Financial Results, with revenue hitting $1.27 billion and an operating income of $38 million. While that sounds impressive on paper, it does however represent a year-over-year drop.

According to AMD, “Revenue was $1.27 billion, down 23 percent year-over-year primarily due to lower revenue in the Computing and Graphics segment.”

The Computing and Graphics segment covers AMD’s graphics cards and processors, and has been a huge driver of AMD’s recent successes, where it has gained ground – and even surpassed – its rivals Intel and Nvidia.

So, any drop in the performance of AMD’s Computing and Graphics segment will have big ramifications for the company as a whole – as we’ve seen in these latest results.

As the results note, “Computing and Graphics segment revenue was $831 million, down 26 percent year-over-year and 16 percent quarter-over-quarter,” and operating income also dropped - $38 million compared to $120 million a year ago, and $38 million in the previous quarter.

Again, this drop was due to lower revenue and operating income in the Computing and Graphics segment, according to AMD.

In the summary, AMD notes that “Computing and Graphics segment revenue was $831 million, down 26 percent year-over-year and 16 percent quarter-over-quarter. Revenue was lower year-over-year primarily due to lower graphics channel sales,” which points at AMD selling fewer GPUs as the main reason for the drop in revenues.

While AMD has been producing come excellent graphics cards to compete with Nvidia, it’s possible that the drop in demand has come from the near collapse of cryptocurrency mining.

A few years ago, cryptocurrency mining was extremely popular, as it allowed people to use their graphics cards to ‘mine’ for cryptocurrency such as Bitcoin, which could be turned into real money.

This led to an explosion in sales for GPUs that were particularly good at mining cryptocurrencies – something that AMD’s cards excelled at. At one point, miners were buying so many cards that prices for the GPUs were rising, and many of them went out of stock.

While this was excellent for AMD’s revenues, the cryptocurrency bubble eventually burst, which means fewer people buying graphics cards, and therefore less money for AMD.

It’s worth noting that it’s not all bad news for AMD. Gross margins grew by 5% to 41% year-over-year, which AMD attributes to the increase of Ryzen and EPYC processor sales.

So, this quarter’s results are a bit of a mixed bag for AMD, and look worse in some aspects thanks to the company’s incredible previous year.

However, AMD has some exciting things planned for 2019, including the launch of its next-gen Navi graphics cards, as well as news that AMD Radeon datacenter GPUs will be powering Google’s Stadia game streaming service, while Sony’s next generation PlayStation 5 will be powered by a custom AMD chip based on its Zen 2 and Navi technology.